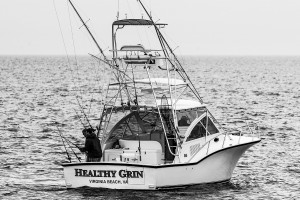 I am a dentist who practices in Yorktown, Virginia, http://www.neilldental.com . Thus, the boat name, “Healthy Grin”. More than a boat, the Healthy Grin is a wide-ranging group of family and friends who are very “dedicated” recreational anglers. That word “dedicated” is often replaced with other words like: obsessed, insane, and other less flattering adjectives. They all mean that we fish a lot.

Other than fishing, the Healthy Grin crew serves on a variety of boards and fishery management advisory groups. Many of us serve as board members and officers of the Peninsula Salt Water Sport Fisherman’s Association. Personally, I served on the Finfish Management Advisory Committee of the Virginia Marine Resource Commission. I am a member of the Virginia Saltwater Fishing Tournament Committee. This is the group that manages Virginia’s trophy fish (citation) program and certifies and maintains state records. In 2013, I was appointed Associate Commissioner of the Virginia Marine Resource Commission. In 2017, I was appointed to a second term at VMRC and was appointed to serve as a commissioner of the Potomac River Fisheries Commission. I am an International Representative of the International Game Fish Association (IGFA) and serve as Chair of the Conservation Committee of the North America Regional Council.  I have served as a member of the Atlantic Highly Migratory Species Advisory Panel for the National Marine Fisheries Service and I am a member of the Atlantic States Marine Fisheries Commission’s Summer Flounder, Scup, and Black Sea Bass Advisory Panel. In 2022, I was appointed to the Mid-Atlantic Fishery Management Council.

We share our knowledge and passion for sport fishing through seminars and by writing articles that have appeared in various magazines. Several members of the crew have been members of Salt Water Sportsman’s National Seminar Series. The Healthy Grin crew has been featured in numerous articles and television shows. Photography from the Healthy Grin has been published all over the world.

The Healthy Grin works closely with fishery scientists. We participate in a number of tagging studies. When a scientist needs dogfish samples, we go catch dogfish. We have spent many hours hunting baby bluefin tuna for a number of research labs. We prefer the billfish studies but we fish for whatever is needed. Some will see this as dedication. Others will see it for what it really is… just another excuse to go fishing! Regardless of the motivation, there are numerous articles published in the scientific journals that have the Healthy Grin listed in the acknowledgements.

On this site, you will find many photographs, up-to-date fishing news, and multiple how-to articles.