The leaves have fallen from the trees. We have put away all of our summer clothes and have pulled out the cold 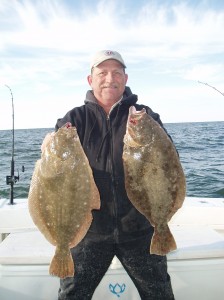 weather gear. It is time to bundle up and chase schools of big rockfish. Maybe, we can anchor on a wreck and catch some tautog. There are a few power plant, warm-water discharges where we may find some speckled trout hiding from winter. What else can we fish for during Virginia’s winter months? We won’t be fishing for flounder. They are called summer flounder aren’t they?

Summer flounder is one of the most popular recreational species along the East Coast. They are commonly targeted spring-fall inside bays and along the inshore coastal waters. Here in the Chesapeake Bay area, we look forward to April as the start of our flounder season as the fish move back inshore from their offshore wintering grounds along the continental shelf. The “flounder pounders” will continue to follow these flatfish around well into November before putting away their flounder gear until the following spring. 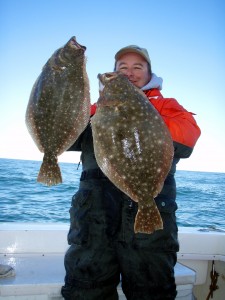 During this time, we hand the flounder to the commercial trawl fleet. The continental shelf winter trawl fishery accounts for the vast majority of the commercial flounder catch.

Flounder don’t read the instruction book. A good number of them will winter over in the Chesapeake Bay and along the inshore coastal waters. It is not uncommon to see the recreational striped bass fleet sitting on the 3 NM line wishing they could get to those diving birds out another mile or two while, at the same time, the trawlers are sitting on that same 3 NM line wishing that they could catch those flounder that are on the bottom closer to shore.

In the old days, back when Virginia allowed the trawlers inside the 3NM line, Cape Henry was one of the areas the 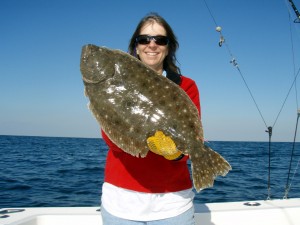 trawl fleet would work for flounder in the wintertime. Flounder are still living at Cape Henry during the winter today. Here, you will find deep water, plenty of structure, and plenty of bait fish. Those flounder have to eat something. These make this area a good place to fish for flounder all year long.

By the middle of winter, live bait is hard to come by. That is OK, strip baits work just fine. Strips of squid and just about any fish will work. 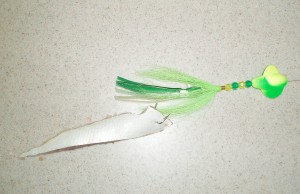 A classic technique is to make strip baits out of the first legal flounder that you catch. Hopefully, you will have enough bluefish or false albacore stored up so that you do not have to sacrifice your first flounder.

You do not need any special “winter” tackle to catch flounder during this time of the year. The same gear that you used in the summer is what you need to use while wintertime flounder fishing. You will need to wear more clothes though. Braided line will let you stay on the bottom with lighter sinkers and it will let you feel the flounder bite better than monofilament line. Terminal tackle is your basic flounder rig, a three-way swivel with a 12-18 inch drop to your sinker and a 3-foot drop to your flounder bait. A bucktail, beads and spinner blade are commonly placed in front of your hook for extra enticement.

The Cape Henry area has deep water close to shore. Try drifting in various depths to find out where the flounder 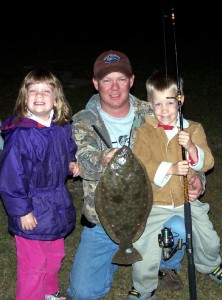 are holding. There are also a number of wrecks in this area and flounder love to hang around structure. It is a good idea to work the bottom around each of these wrecks. On a trip last winter, we started at the Cape Henry Wreck and caught some nice flounder. Next, we tried the Westmoreland where we caught spiny dogfish. We left there and found some more flounder in the area of the CBJ Buoy. Keep moving around until you find a concentration of fish. Dogfish can be a nuisance while flounder fishing this time of the year. At Cape Henry, we found an even bigger nuisance, large striped bass. It seems that they like flounder baits just fine. We caught two to three striped bass for every flounder that we caught. I don’t guess that is too bad of a problem to have.

Cape Henry is not the only place to catch wintertime summer flounder. Fishermen accidently catch flounder each winter while trolling for striped bass. Flounder tend to hang out together 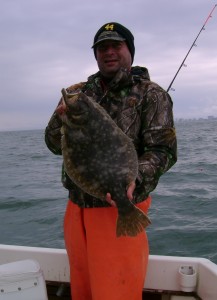 so if you catch one, it is a good idea to break out the flounder gear and give that area a try. Flounder will hold at the structure of the Chesapeake Bay Bridge Tunnel (CBBT) all winter long. The areas of the CBBT which have the deep water holes are good places to try. The deep water near the high rise can be very good.

You can head on out and join the trawlers in the ocean. There is a lot of ground to cover out there and you cannot cover it like the trawlers can. You can increase your odds of finding concentrations of flounder by fishing around structure. If you are out there fishing for sea bass or tautog, it may be worth your time to do a little drifting around the wreck you plan on fishing. Flounder may be found around any of the ocean wrecks. The Triangle Reef area can hold good numbers of big flounder.

If you like to catch flounder, you do not need to stop just because it gets cold. The flounder are still around and they 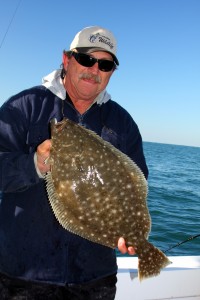 are still biting. You do need to be a little extra careful just like you do whenever you are fishing in cold water. Also, you need to check the regulations, they are changing all of the time. Some years, the flounder season is closed during the winter time while other years, the season is open all year.

The Virginia Saltwater Fishing Tournament recognizes flounder weighing a minimum of 7 pounds for a trophy fish citation. A released flounder must be at least 26 inches long to earn a release citation. The Virginia State Record flounder is a 17 pound 8 ounce fish caught by Charles Cross in 1971.

Structures in the Cape Henry area:

Structures in the Triangle Reef area: