With great anticipation, all hands had their attention focused on the spread of lures following in our wake. Several fish had already been boated but none were the tuna that we were targeting. Shortly, the right flat-line rod was bent over. I called down from the bridge, “This may be what we are looking for!” Shortly, it was high-fives all around as the bluefin tuna was brought over the side. Our prized fish was about 11 inches long. 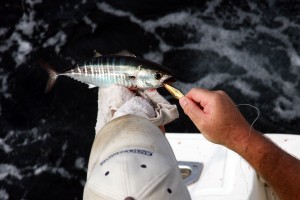 Bluefin tuna were primarily a sport fish in the United States. The other tuna species were favored as table fare so there really was not much pressure placed on these fish. Old-timers will tell stories of being able to walk across the water on the backs of bluefin tuna. That has drastically changed and now an individual bluefin tuna can be worth tens of thousands of dollars in the commercial market. The stocks of these fish have been greatly reduced to the point that scientists have warned that we may see a total collapse in the near future if the international catch is not greatly reduced.

Atlantic bluefin tuna have been managed as two separate stocks. It was thought that the fish in the Western Atlantic (our fish) and Eastern Atlantic were different populations and did not mix. International regulations have 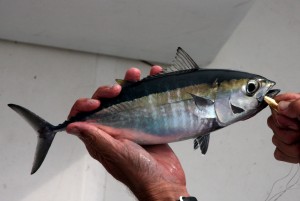 been based on this. Regular tagging studies of pelagic fish suffer from very low return rates. Newer, high-tech tags are being used to study bluefin tuna. These studies show that bluefin tuna do indeed cross the Atlantic Ocean. Maybe there are not two different stocks at all and maybe the Eastern Atlantic fleets should be fishing under regulations as strict as those for the Western Atlantic. Well, there are other ways at looking at this and one is to look at the babies. Young of the year (YOY) tuna have not had a chance to cross the Atlantic Ocean yet. Even if larger fish do cross the ocean while feeding, that does not mean that there is just one stock of Atlantic bluefin tuna. The DNA will tell. That is what we were doing. We were collecting YOY bluefin tuna for Dr. John Graves of the Virginia Institute of Marine Science. He would compare the DNA of our fish with YOY bluefin tuna from the other side of the ocean.

Earlier in the summer, we had caught a couple of baby tuna while fishing for dolphin. Not knowing what they were, we collected a finlet from each prior to release. These finlets were all that were needed for a DNA analysis. It turned 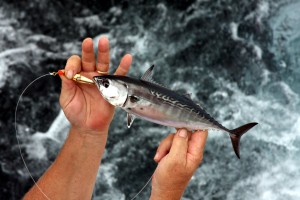 out that they were bluefin tuna and the scientists were excited. Soon, we had a special permit allowing us to capture and keep baby bluefin tuna. This was our first attempt to target these little fish.

Because it is Fun! 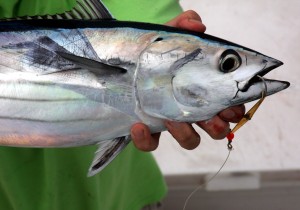 Why would someone head offshore and target little fish? The crew on my boat is used to fishing for science. There is no question that we are more excited when we are out to tag blue marlin than when we are targeting spiny dogfish for some research project. Sometimes I have to sneak in the less-fun fish. I have no problem loading the boat with anglers for a baby tuna trip however, because it is fun! This past fall we made one of these trips and boated 115 little tuna-type fish. The action was constant with fish taking the baits right out of our hands as we would try and get the spread out. It got to the point where it was a struggle to get two lines in the water. The next time that you are offshore and it seems like the ocean is a desert with no life, break out the little stuff. This is especially true if you have young anglers onboard who really need some action. Some of the offshore charter boats will add little baits to their spreads to keep their charters entertained during slow times.

That first dedicated baby tuna trip resulted in fifteen bluefin tuna, numerous skipjack tuna, false albacore, frigate tuna, bonito and some other small things I’m still not sure what they were. It also resulted in a box full of dolphin and two nice yellowfin tuna. This was on a day that the fleet was not having any luck with the yellowfins. We caught fifteen bluefin tuna of which fourteen were about a foot long. The fifteenth bluefin weighed in at 128 pounds. It is amazing what you can catch if you will take your time and let the drag do its job. Other small tuna trips have resulted in white marlin in the catch. Big fish will bite little lures and we always catch some “good” fish on these trips. You will lose more fish than you are used to. Some fish will simply bite right through the light leaders and the small hooks can straighten out and pull out of the fish. Expect to lose some lures when you are pulling little baits in big water. Also, expect to have a lot of action and a lot of fun!

Our little tuna spread consists of small plugs designed to catch dolphin, small cedar plugs, and spoons which you would normally troll for Spanish mackerel. We will pull the dolphin lures off of the long riggers, the mini-cedar plugs in the short rigger position, and the spoons straight behind the boat. The spoon set up is a small spoon, like a #1 Clark, tied to a 50-pound monofilament leader about 30 feet long. The other end of the leader is attached to a snap swivel which is attached to either a #1 planer or a small in-line sinker. We troll these lures at about six knots. When 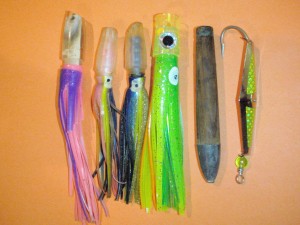 we are on a dedicated little tuna trip for science, we pull all little baits. You do not need to do the same when you just want to add a little more action to your offshore day. Leave out most of your normal trolling spread and  put out a couple of your Spanish mackerel setups in place of your flat-lines.

Keep on your toes out there. It is easy to get complacent when you are swinging these little fish into the boat. Those little fish that you are catching are nothing more than food for big fish. My cousin was working the cockpit one trip and reached out to grab the leader to swing a small skipjack into the boat. Out of nowhere, a 400-pound blue marlin comes out of the water and attacks that skippy from above. The marlin got a meal, everyone in the boat got a scare, and my cousin got wet. We had a similar experience when a large wahoo ate a small jack right at the back of the boat. Take nothing for granted when you are fishing where the sea monsters live.

Bluefin tuna populations are greatly depressed and the international catch continues at a rate much higher than scientists say that the species can sustain. My boat, the Healthy Grin, has had a permit to target YOY bluefin tuna each year. That first summer, when we caught them, was followed the next year by a great fishery for small bluefin tuna (27-30 inches) on places like the Hot Dog and 26-Mile Hill. We were not able to find any baby bluefin that year and the following year had a great fishery for bluefin tuna in the 47-inch class but very few 27-inch fish. Again no baby tuna that year. Now we have a good fishery for 100-pound class fish but very few small fish have been on the inshore humps. This lack of small fish is not a good sign for the future.

These fish grow very fast and they can have prolific spawning years. The YOY bluefin tuna we catch late-summer and fall are the fish which will be the 27-inch fish the following summer and the 47-inch fish the year after that. After several years of not finding any baby bluefin, 2008 was our best year ever for YOY bluefin tuna. Based on that the Hot Dog and other hills should be loaded with 27-inch bluefin tuna this summer and in a few years, we will have a whole new group of 100 pound plus bluefin tuna.

When you pull small lures offshore, you will catch a large variety of fish including a collection of small tuna-like fish. Species like frigate tuna and false albacore will have a wavy, mackerel pattern on their dorsal surface. Skipjack tuna will have lines on their ventral surface. The true tuna will have a solid color on their dorsal surface with vertical stripes on the sides. The real trick is telling small blackfin tuna (legal to keep) and small bluefin tuna (not legal to keep) apart. The easiest way is the length of the pectoral fin. Lay the pectoral fin against the side of the fish and lift the dorsal fins. If the pectoral fin does not reach the notch between the dorsal fins, you have a bluefin tuna.

What we have learned from these bluefin tuna is that there are indeed two distinct stocks of bluefin tuna in the Atlantic Ocean. They will cross the ocean but will return to where they were born to spawn a new generation. The two spawning areas are the Mediterranean Sea and the Gulf of Mexico. While there are two separate spawning stocks, these fish do not stay on their own side of the ocean when they are not spawning. What happens in Europe can have an impact on our fishing here. Fish as young as 2-years-old will cross the Atlantic Ocean and Eastern Atlantic fish make up a large part of our fishery. Early studies are showing that of those 50-100 pound bluefin tuna that we catch off of our coast, over half are fish which were spawned in the Mediterranean Sea.

For more information on the research done by Dr. John Graves, visit: http://www.vims.edu/about/directory/faculty/graves_je.php