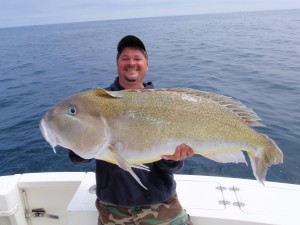 Anglers mining the sea bottom along the continental slope strike gold! Golden tilefish are one of the more prized catches of offshore bottom fishing. Prospecting for these tasty golden creatures is a labor intensive endeavor. Many will resort to using electric reels to make the job easier. That is fine if you are just collecting groceries. Sport fishing guidelines do not allow the use of electric reels so we will be out there using conventional tackle to battle these beasts up from the bottom. 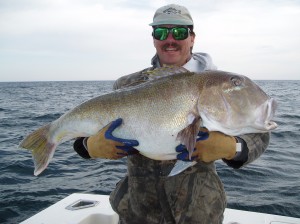 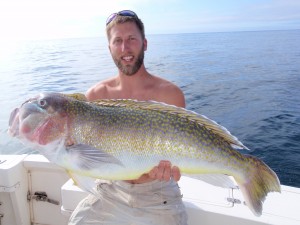 There are many, many miles of ocean bottom along the continental slope of the eastern seaboard. These record fish give you an idea of how to narrow your search area. Concentrate your efforts around the canyons. One hundred fathoms is a good starting depth. The golden tilefish we have caught have been as shallow as 70 fathoms and as deep as 140 fathoms. 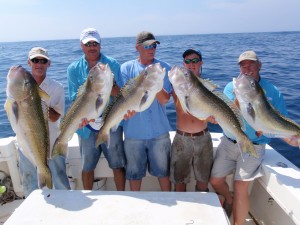 Golden tilefish like to burrow. To find where they live, find soft bottom. Some sharpies can use their bottom machines to find the proper sediment type. I have not figured that out so we use lead. When we are looking for a new golden spot, we will drop down to the bottom and feel what we have. Braided fishing lines make this easy. We want a very sticky bottom. When we find the right area, we mark the spot on our chart plotter. The ideal is to find soft bottom close to rocky bottom. Crustaceans are supposed to be the primary food source for golden tilefish so having their burrows close to where their food lives is prime. 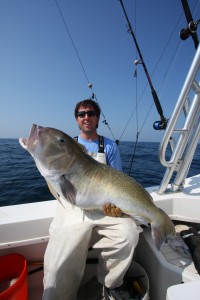 Goldens will burrow in colonies. When you do catch one, mark the spot and work it. A fish that creates burrows should be fairly stationary but they do seem to move around. You may find them shallow one trip and deep the next. If you feel that you have found good bottom but are not catching fish, move around but do not hesitate to try that area again on another trip. 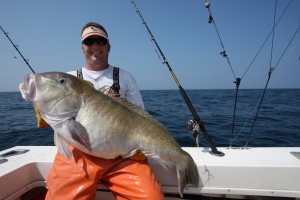 Crustaceans are supposed to the primary food source for golden tilefish. We have not had success with various crab baits yet. We have had some success with shrimp. Most of our goldens have been caught on squid or on various fish baits. Fresh cut bait works well. Something like false albacore works very well. We have also had good luck with whole spot, croaker and mullet; either alive or dead. 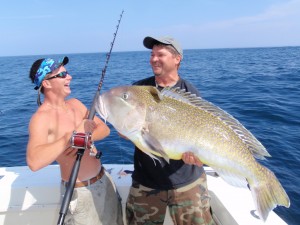 A variety of tackle may be used. Any reel that can hold enough 60-80 pound braided line to reach the bottom may be used. Both the reel and rod must be able to handle up to 2 pounds of lead plus a big golden tilefish. High speed reels allow you to retrieve your line more swiftly from the deep. Slower speed reels are easier to crank. Two-speed reels give you the best of both worlds. 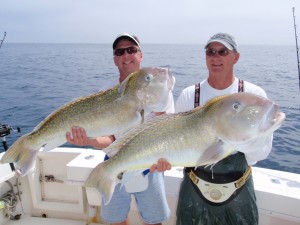 Terminal tackle can be as simple or as complicated as you want to make them. You can buy commercially made, multi-hook tilefish rigs. Multiple hooks allow for more chances for a hook-up. I cannot imagine hooking more than one of these fish at a time. One fish is more than enough of a challenge when hand-cranking these fish up from the deep. The multi-hook rigs may be a better choice for those using electric reels. IGFA Sport Fishing guidelines only allow 2-hooks at most on a bottom rig. You can just use a plain, one or two hook bottom rig or you can add various glow beads, tubing, and flashing lights. Sometimes, the extra bling does seem to make a difference. 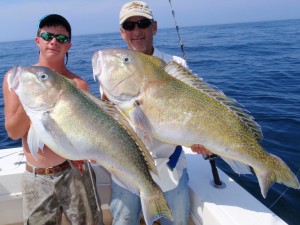 Golden tilefish are subject to over fishing. The vast majority are caught by commercial fishing. They are a very strictly regulated species. In the South-Atlantic region (North Carolina on down), recreational anglers are only allocated 3% of the overall quota. When the season is open, recreational anglers are allowed only one golden tilefish per trip. From Virginia on north, the commercial industry is closely regulated. Recreational anglers are considered to be such a small part of this fishery that so far, there have been no bag-limits or closed seasons placed on them. This can change at any time. Virginia has enacted its own tilefish regulations in order to be proactive in protecting what has become a very popular recreational fishery. Virginia allows a 7-fish tilefish bag limit per angler to be landed. This is a combined limit of all species of tilefish (mostly blueline tilefish are caught). Be sure to know the current regulations that apply to you and only catch the tilefish that you can use and then go do something else. At these depths, this is not a catch-and-release fishery.