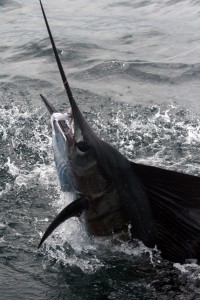 Jutting out into the Atlantic Ocean where the Labrador Current and the Gulf Stream meet is Cape Hatteras, North Carolina. The often turbulent waters off of Cape Hatteras are loaded with game fish. You don’t even need a boat to get in on the action. The beaches of Hatteras offer some of the best surf fishing in the world. Big red drum caught at The Point is what surf fishing is all about.

Once you do head out in a boat, a whole new world awaits you. Due to the warm Gulf Stream waters, Hatteras is home to many warm-water fish. Bottom fishing for grouper and snapper is truly world-class. This past spring, we went on a trip with Capt. Spurgeon Stowe on the Miss Hatteras. Capt. Stowe is nothing short of a living legend in the mid-Atlantic. We pulled out of the slip and were soon greeted by an angry inlet. It was not pretty and the captain telling us to hold on and that it was going to be rough did not make us feel very good. After a short run from the inlet, we proceeded to catch red, vermillion, silver, and glassy eye snapper, several types of grouper, and numerous amberjacks. On top of that, the wind died out and the seas became slick calm. We had a ball. 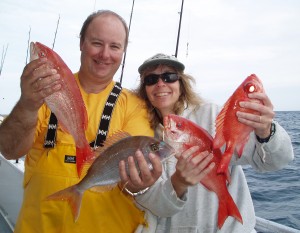 The near shore waters off of Hatteras are home to cobia, Spanish mackerel, false albacore and king mackerel. Hatteras has of some of the best king mackerel fishing there is. Kings are available all year but it is the Fall when most of the “smokers” are caught. The preferred method for catching big kings is to slow troll live menhaden which were caught earlier in the day. 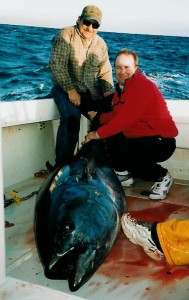 From November through January, giant bluefin tuna take up residence in the ocean waters off of Hatteras. These fish were first found by anglers fishing for the bluefish which winter over around the many ship wrecks found in this area. These giants can be caught by chunking with menhaden or by trolling “horse” ballyhoo. On my first trip for giant bluefin out of Hatteras, some years ago, we were successful catching bluefin tuna both on the chunk and on the troll. The trick was staying in the boat. The seas were straight up and down and there were very big fish trying to pull me overboard. It made us a little nervous when we were in the charter boat, with the diesels running, sitting in the slip. We asked what we were waiting for and the captain said that the inlet was going to be rough and he was waiting for one of the more experienced captains to lead us out. We had a great day of fishing though my wife was rather happy when we were back on dry land. 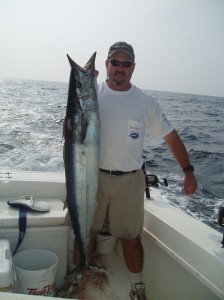 Offshore fishing can be spectacular and the run to the offshore grounds is very short. Hatteras is probably the best place to catch Atlantic sailfish north of Florida. I have had anglers complain to me that at times, the sailfish can be so thick that they become a pest and interfere with their “meat” fishing. I think that is a good problem to have. Blue marlin and white marlin are caught in numbers and the blues are big. A lot of wahoo are caught and the dolphin fishing is amazing.

Despite all of this and other great fisheries in Hatteras that I have not mentioned, it is the yellowfin tuna which is king. Abundant numbers, year-round availability, tough fights, and excellent table fare make this fish such a prized catch. Yellowfin tuna can be caught out of Hatteras all year but the prime time is September through May. 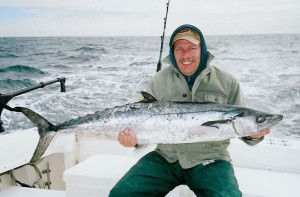 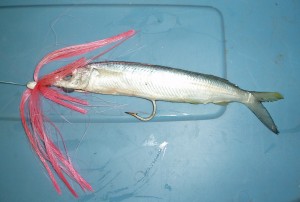 Hatteras yellowfin tuna may be caught anyway that you fish for yellowfin. Chunking will work though it is not done much here. Trolling artificial lures like a Green Machine will also work but you may want to keep it hidden if you are trying to blend in with the locals. Trolling a deep bait off of a planer can be a day saver when the bite is tough. More boats are fishing with kites, green sticks, and dangler rigs when the yellowfins are skying out of the water feeding on flying fish. These techniques allow your bait to just touch the water on occasion which can be the trick when the tuna are after flyers. Spreader bars have become popular and daisy chains have long been used. 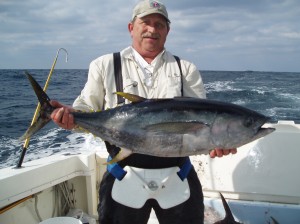 All of these are supplemental techniques. The most popular way to catch yellowfin tuna out of Hatteras remains trolling a pin-rigged, chin weighted ballyhoo behind a sea witch. With a spread of sea witches in various colors trolled at about six knots, you cannot go wrong. 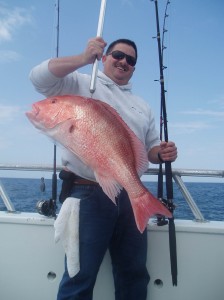 Hatteras is a fisherman’s paradise. The fish are big and plentiful and the runs to the fishing grounds are short. There are numerous hotels, marinas, and charter captains which cater to traveling fishermen. The inlet can be a challenge and when you first fish out of Hatteras you should go with someone who is familiar with the local waters. Expect it to be on the windy side much of the time. It is especially important to keep a good weather eye while fishing off of Hatteras. They don’t call this area the “Graveyard of the Atlantic” without reason. A sea worthy boat, common sense, and some knowledge of the local waters will allow you to safely enjoy one of the best fishing locations in the world. I have a number of friends who fish out of Virginia most of the year but move their boats to Hatteras to fish during the winter. Each year, some of them would head back down there a bit earlier and come back a little later. Eventually, the fishing was so good, a number of them now just leave their boats down there all year. Now, when I want to fish with them, I have to go to Hatteras. That is just fine with me.