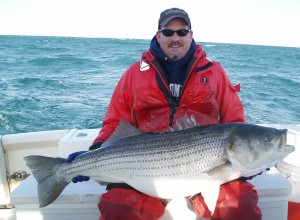 While striped bass are available all year long, it is during the wintertime that the largest rockfish are here. Some will have put their boats and fishing gear away for the winter but the rest of us just put on more clothes and experience some of the best fishing of the year. 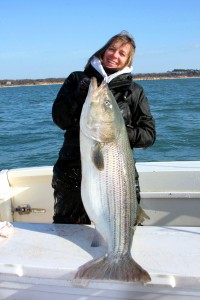 These large rockfish can start to arrive in October. Halloween is when we would start to fish for them and there were years when we would catch a few fish pushing the 40 pound mark, fishing at night, at the Chesapeake Bay bridge Tunnel (CBBT). The big influx of large fish will not occur until later. Watch the water temperatures. When the bay water gets down to around 50 degrees, it is time to start hunting trophy rock. The months of December, January, and February is the prime time to hunt for the largest striped bass. 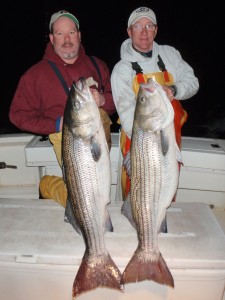 Exactly where to find them will depend a lot on just how cold it actually gets. Some winters will be mild enough that the fish never leave the bay. Other winters, the fish have left by mid-December. The warmer the water, look for the fish up the bay and up the coast. As the water gets colder, look for them moving down and out of the bay and down the coast. During colder winters, we will follow the fish on down to Oregon Inlet (remember to get a North Carolina fishing license). The coldest winters can push the fish offshore, outside the 3 nautical mile line where we cannot target them. 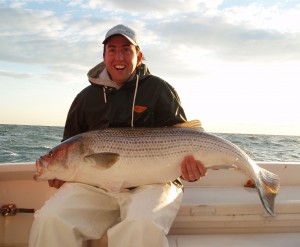 I do not know what water temperature is the low point. 50 degrees or so is when large fish arrive in numbers. Down to 44 degrees seems fine and we have had great days in 42 degree water. I have caught them in the 30s but when it gets below 42 degrees, my confidence level goes down. I do not know if the cold temperatures really bother the rockfish. I think that the rockfish will go where the schools of bunker go. Find where the bunker are and the rockfish will show. There have been some colder winters when the fish did not seem to feed as often as they did before the temperatures got really low. There have been times when they have gone on an every-other-day feeding pattern that you could plan your fishing trips by. But, as with most fishing, by the time you have it all figured out, something changes. 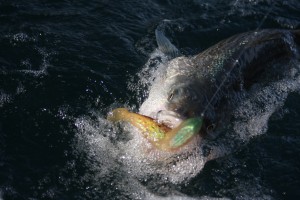 One thing you can look at during the coldest times is depth. When the water temperatures get really cold, rockfish seem to hang around the 60-foot contour line. Look on a chart and see where that 60-foot line comes inside of the 3 nautical mile line. You will see that the deeper water is closer to shore down the coast in North Carolina waters. 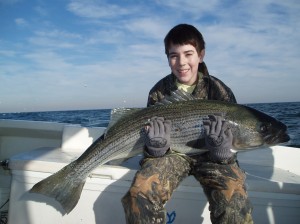 Regardless how cold the winter, these fish will move back towards the bay in preparation for their spring spawning run. February is a great month for catch-and-release action at the CBBT.  During this time, I think that the length of daylight is more of an influence on their movement than the water temperature.

What to Look For 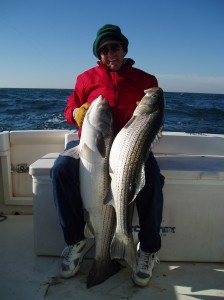 The obvious sign of feeding rockfish is working birds. Gannets falling out of the sky is a very good sign. Gannets are large birds and they will typically be a sign of schools of bunker being worked by big rockfish. While we like finding gannets, do not ignore smaller working birds. There are times when big rock will be feeding on schools of little silversides. Even little terns ware worth a look when they are feeding. The absence of birds does not mean the absence of fish. Slow down and look at your bottom machine. If you see pods of bait, try fishing the area. There have been times when we could not find birds or bait but a school of fish would show on the machine. When that happens, you will catch them as long as you can stay on them. If you lose them, it can be hard to get back on them without the birds showing you where they went. Usually, they have not moved far and if you keep searching the area, you will stumble on them again. 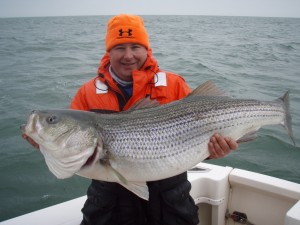 Big rockfish can be caught anyway you can imagine and “elephants eat peanuts”. You can catch them jigging, trolling umbrella rigs, casting flies and so on. When we are targeting trophy-sized striped bass, we will use techniques that are more selective for the largest rockfish. Mostly we will fish with eels or troll big jigs and jumbo-sized spoons. We tend to do more of the big-lure trolling in the ocean and more eeling inside the bay. We will always have rods ready to cast to breaking fish and rods ready to jig them up when we find the fish stacked up under the boat. Those opportunities are too much fun to pass up but the majority of our largest rock have been caught on eels and large trolled lures.