An Island For Fishermen

An Island For Fishermen

The arrival of large red drum is a highly anticipated event each spring. They will first appear in the surf of Virginia’s barrier islands around the full moon of April. By May, this fishery is in full swing. As the season progresses, fish will be caught on and around all of the shoals at the mouth of the Chesapeake Bay but for the best early season bite, fish the surf. Surf fishing from the beach is excellent. We do it from a boat.

The Good, Bad, and Ugly 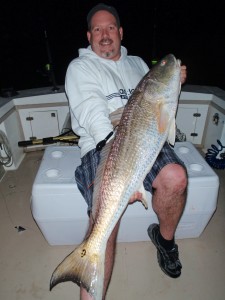 Let us skip the good for a moment and cover the bad and the ugly. Charles Southall anchored his boat just outside the surf line one May evening. It was a little sporty but the drum were there. The wind and seas picked up a bit and Charles decided it was time to move out of the wash into calmer waters. Chris Boyce went up on the bow to retrieve the anchor. About that time, a wave broke over the bow, over Chris and up over the windshield. We could not see anything. Charles and I both thought that Chris must have been washed overboard and we were going to have to find him in the dark. When the water cleared, a very wet Chris was still there on the bow. He got the anchor up and we moved around to the bay and calm water. That was the “bad”. The “ugly” refers to another night we spent fishing outside of the inlet between Fisherman’s and Smith Islands. This time, we were in my 30-foot Albemarle. We anchored up, before dark, outside the bar the surf was breaking on. It was small surf, just enough to define where the bar was. After dark, the wind changed and the bite picked up. After awhile I notice we were really close to the surf line and fired up the engines to move. About that time, we found the bottom and were not going anywhere. Now we were the object the waves were breaking against. Not a great situation for an inboard-powered boat. Young, Hunter Southall was in the cabin, sleeping through the whole thing. His dad, Charles, woke him up and had him put on a survival suit. Hunter then asked if he could go back to sleep. Roger Burnley was tired and unconcerned so he went to sleep also. Charles and I stayed up all night, worried and talked to the Coast Guard. They said that there was nothing they could do but they wanted to talk. Ric Burnley felt that if we were on the bar we were trying to fish, it was time to be fishing. Ric caught large red drum all night until the tide came in and we were floating again. It is a good thing that Albemarle makes a tough boat. Other than a slightly bent rudder, the boat was fine and we were able to motor out of there. This is just to illustrate that you can get in trouble in there, so pay attention. It can be perfectly safe depending on the conditions. Kayaks and boats of all sizes will be fishing this area. Pick your days and it is much easier to see what is going on during the daytime. Though the bite is often better at night, fish will be feeding near the beach all day.

Now back to the “good”, actually the great. This is a fantastic fishery. Memorial Day, we went out to place tags in 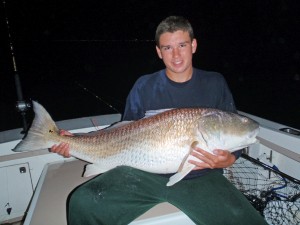 large red drum for the Virginia Game Fish Tagging Program and for a satellite tag study conducted by Dr. John Graves. The only problem was, we ran out of tags (or we caught too many fish if there is such a thing).

The aptly named Fisherman’s Island is found at the mouth of the Chesapeake Bay where the northern end of the Chesapeake Bay Bridge Tunnel meets land. Fish can be found all along the seaside of this island. The inlet between Fisherman’s Island and the next island, Smith Island, can be really special. Along the beach at Smith Island is also good. There is an area of large stone at one place in the Smith Island surf which you can find marked on charts as “Ruins”. This can be a very good area. There are bars and slues all along this area. The inlet is actually navigable but is unmarked and ever changing. A good time to explore is during low tide on a calm day. This area is made for outboard motors which can be tilted up. If you play around here enough, you will bounce bottom sometime. When conditions are right, some local sharpies will sneak in behind the bar and fish between the beach and the breakers. I’m not a local sharpie and endeavor to stay outside of the wash. Later in the season, the south end of Fisherman’s Island becomes very good in an area between the island and buoys 8 and 10. This is deeper water out away from any surf. You will find a fleet of boats there when the fishing is good. Both black and red drum will be caught here.

Red drum can be caught many different ways with a variety of natural baits and lures. A simple and effective way to catch a big red at this Fisherman’s Island fishery is to anchor up and fish natural baits on the bottom. We use a standard fish-finder rig with enough weight to hold bottom. Hook size is about 8/0. We will use leader in the 80 to 100 pound test range, short enough for easy casting. Typically, we will anchor offshore of a sandbar and cast our baits towards the bar. We engage the reels and put the rods in rod holders. Most often, the drum will grab the bait and hook itself. 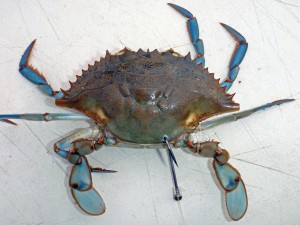 Big reds are not picky eaters. They will readily pounce on most any crab or fish bait. For years, my favorite red drum bait has been peeler crab. Pop off the top shell, cut the crab in half and you have two fantastic drum baits ready to be threaded onto a hook. Cut fish like menhaden, mullet, spot, and croaker  make great drum bait. The problem with the cut fish and peeler crab is that everything likes to eat those things. The healthy population of skates, rays, and sharks in this area can keep you very busy. Live spot and croaker make good baits and you don’t catch as many unwanted fish on them. Now, my favorite red drum bait is a live, adult, whole, hardshell blue crab. Some prefer the female (sook) crabs. I don’t think it matters. If I am buying crabs, I will buy sooks because they are cheaper. With crabs we catch ourselves, we will use both male and female crabs as bait and the drum eat them both. We will break the claws off and I like to cut the tips of the spines off. I’m not sure if any of this matters to a drum but we are trying to make our baits a little easier to eat. Very rarely will we catch anything other than a big red drum on a live hardshell crab. When that bait gets bit, it is the right bite.

Now for what happened to those Memorial Day drum which we fitted with pop-up satellite tags. All of the fish 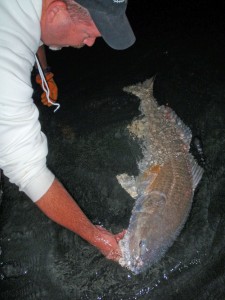 survived the catch and release experience. Thirty days later, the fish were still in the area. Several were on Nautilus Shoal, just offshore of Fisherman’s Island, one went across the bay to Cape Henry, and another went up in the Chesapeake Bay on the Eastern Shore side. The fish fitted with three-month tags did some different things. One was at the mouth of the York River. Four were offshore around the 30-fathom curve.  At six months, all of the fish were inshore between Cape Hatteras and Cape Lookout, North Carolina. The detailed data collected by the tags is still being analyzed.