published in the Angler 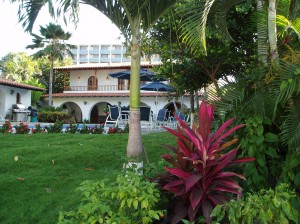 In the mid-Atlantic, the action never stops. Even in the dead of winter, there are fish to be caught. However, sometimes it is nice to go to someplace warm. 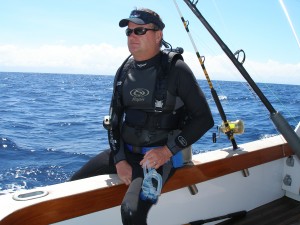 Dr. John Graves of the Virginia Institute of Marine Science told me that he needed an angler to help him catch some white marlin for a study he was doing. He wanted to know if I was interested in helping him out and of course, I was more than willing. He then mentioned that we would be going to Venezuela and, oh-by-the-way, Guy Harvey will be joining us to film his television series. That was my introduction to some of the best billfish water on the planet. That was several years ago. I have now made numerous trips to Venezuela and each has been truly amazing. 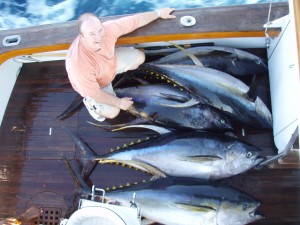 About 30 miles off of the coast of Venezuela you will find La Guaira Bank rising up from the depths. All of the Atlantic billfish call this area home making for some fantastic fishing. In addition to all of the billfish, you will find wahoo, dolphin and when the yellowfin tuna show up, they are big weighing in at over 200 pounds. Action is great all year but the fall is when double-digit catches of white marlin are a common occurrence so that is when we scheduled our trips. 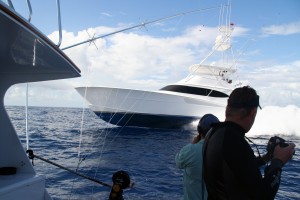 A three-hour flight out of Miami or a four-hour flight out of Atlanta will get you to Venezuela. You will need a passport and a visitors card that will be supplied to you on the plane. Present both to Immigration, clear Customs and you are in. It is good to have a driver from your hotel meet you at the airport to make sure that your trip is a smooth one. There is a lot of political rhetoric flying around from the Venezuelan President but I never felt less than safe on our trips. I did not go roaming around though. The night-life in Caracas is supposed to be a lot of fun but we were there to fish. It is always good to check for any travel advisories. 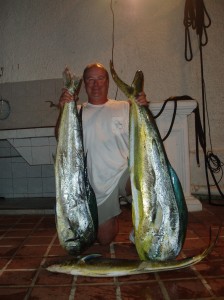 The town of Caraballeda is at the center of the sportfishing scene. It is not your typical tourist destination. A number of years ago, there was a large mudslide in the region and the area still has not fully recovered. The marinas that we are interested in were not affected. What it boils down to is that this is a great location to visit to fish. It is not a great place to take your family unless they are into fishing as much as you are. 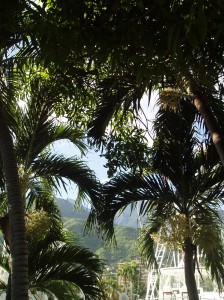 We have stayed at two locations on our visits to Venezuela, Mango Marina and Marina Portofino. Marina Portofino is the larger of the two and will have the most boats. Do not be surprised to see some of the well-known charter boats from the mid-Atlantic tied up at the dock. Mango Marina will have a fleet of about five boats and includes the legendary captains Bubba Carter and Jimmy Grant. The staff of both establishments will speak some English though you should expect some communication challenges. But hey, it is all about the fishing. A little English, a little Spanish, and some hand gestures seem to get everyone on the same page. You can think of Mango Marina as a nice bed-and-breakfast with all of your food and drink included. Marina Portofino is more of a fishing lodge. It has a nice restaurant on premises and a little cabana bar to relax at after a day of fishing. 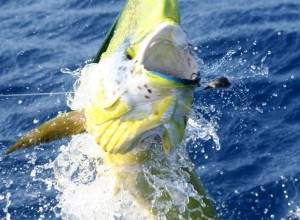 Each morning starts out with a leisurely breakfast followed by a run of an hour or less to the fishing grounds. The spread is put out and billfish will start to show up. A typical trolling spread consists of a couple of squid daisy chain teasers with ballyhoo trailers, a dredge or two, and 4 naked ballyhoo pulled on 30-pound class stand-up tackle. At times, we would have a pitch bait ready on a 50 for a blue marlin but most of the time, we just caught the blues on the 30s. 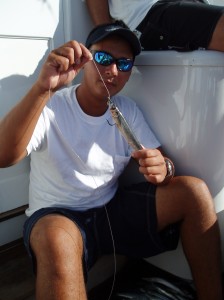 J-hooks are still the most common hooks used but circle hooks are used a lot also and most crews are more than happy to use whichever style you prefer. We used J-hooks and a variety of circle hook styles during our trips. We really were fishing with cross-purposes. Guy Harvey was filming for his television series. He would want to get a lot of film on each fish including underwater time with all of the billfish we caught. John Graves was there to conduct research and he wanted to deploy a lot of pop-up satellite tags on white marlin. Blue marlin and sailfish took away white marlin research time. I was just having a blast. With Guy jumping overboard and John placing the tags, I got to do most of the catching. It was a dream job. Fishing was excellent and we fished enough days that Guy got more than enough film, John deployed all of his tags and I had sore arms. 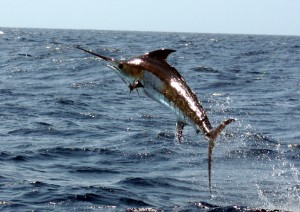 Fishing off of Venezuela is just ridiculous. They have good numbers of sailfish all year but the captains don’t really target them, the marlin fishing is just too good. If they need a sail for some slam, they may move in shallower to target them but in general, they catch plenty of sails while marlin fishing. Grand slams are so common that nobody even raises an eyebrow when you get one. There are enough blue marlin around that with all of the white marlin and sailfish, double, triple and even higher order of slams are not uncommon. Springtime is the time when double-digit blue marlin catches are possible. During the fall, when we were there, we saw two or three blue marlin a day. Besides the marlin and sailfish, Venezuela is one of the best places in the world to catch a swordfish. They don’t have to drift for them all night like we do on the East Coast. They drop for them in the middle of the day. When grand slams become commonplace, you can drop for a super slam to make things more of a challenge. It does not stop there though. There are also a good number of spearfish caught. A half dozen or so were caught during the time that we were there. Five billfish species in a single day, Venezuela is the place to make a fantasy slam happen. If you can leave the billfish alone, world class bonefish flats are nearby and monster peacock bass are available inshore. 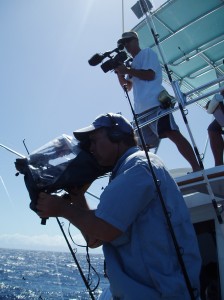 We have so many fishing opportunities in the mid-Atlantic that we don’t have a lot of incentive to travel the world to catch fish. Our own back yard is a great fishing destination but if you are up for some exploration outside of your normal fishing grounds, I think that you will find a trip to La Guaira Bank worth the effort. 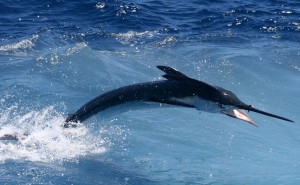 If interested in a fishing trip to La Guaira Bank, contact Capt. Jimmy Grant and he can help you set up a trip. Phone: 58-414-324-4544, email captjimmygrant @ hotmail.com