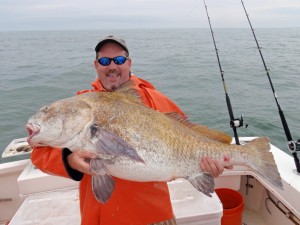 Many black drum are caught by anglers fishing for other species. Anglers fishing for stripers, tautog, spadefish, sheepshead, red drum, and speckled trout all have a chance of tangling with a big black drum. In the lower bay area, there are several ways to target these fish.

While some black drum are caught here in the cold water months, they are primarily an April through November fishery. The classic way to catch these fish begins in April when the dogwoods bloom.

Fishermen begin to look for these fish along the bayside of the Eastern Shore. The Cabbage Patch, near the Concrete Ships, is the prime area. Buoy 13, near the high rise of the Chesapeake Bay Bridge Tunnel, has been productive as has the area around 36A, off of Cape Charles. When the fish are running, you can find the fleet of anchored boats.
These fish are not great fighters, but they can weigh over 100 pounds so fairly heavy tackle is in order. 30 lb class is about right. These fish can usually be fought from anchor but if you are using light tackle, having a float attached to your anchor line is a good precaution in case you have to chase a fish.

Terminal tackle consist of a fish finder rig with enough weight to hold bottom. The leader to your hook is usually 60-80 pound monofilament but wire can be used if sharks are a problem. Hook size can vary based on your bait, 8/0 is a good place to start. Baits are clam and crab, used separately or together on the same hook. Circle hooks work well with clam baits, I don’t like them as well with crab baits. Hard crab will work, softshells are considered best, often combined with a clam. Peeler crab is great and stays on the hook better than softshell, especially if there are bait stealers around. Pop the top off the peeler and thread your hook in through a leg socket. The whole crab can be used or it can be cut in half to make two baits. A rubber band can be used to hold the legs of the crab to the shank of the hook. Rubber bands are also used to help hold clam baits on the hook but I have not figured that one out yet. I just take an entire chowder clam and pass the hook through the foot and then back through the body of the clam. Any dangling pieces are threaded onto the hook. This works fine for me.

Rods are usually fished from the rod holders, light drags and clickers on. Close attention needs to be paid to your lines. These big fish often have gentle bites and can take your bait if you are not alert. When one bites, hesitate to allow the fish to get the hook in its mouth and set the hook. With a circle hook, hesitate longer and then just start reeling. This fishery usually is at its peak in May and June.

During this same time period, these fish are caught by surf fishermen along the seaside of the Eastern Shore. They are also caught up on the shoals near the northern section of the Chesapeake Bay Bridge Tunnel at night. Red drum are also caught in these same areas and by the same methods. Fish baits are good for red drum, clam is good for black drum, crab is good for both.

Fish baits are not considered good baits for black drum but artificials that mimic fish can be used to catch them. Spoons trolled around the shoals for red drum will also catch blacks. Some are caught every year by striper fishermen pulling Stretch 25+s.

A more recent fishery has developed around the islands of the Chesapeake Bay Bridge Tunnel. All four islands can have drum but the 2nd and 3rd are the most consistent. Most of these fish are caught by casting bucktails with curly tailed grubs. The lure is retrieved just fast enough not to get snagged. The fish can often be seen up near the rocks or circling in a school around the island. These fish spook easily. You can try to move your boat to them or you can be anchored and wait for them to come to you. Chumming the area with crushed clam will improve your odds. I have had good luck lobbing a whole chowder clam on a hook with no additional weight in front of the roaming school. Early and late in the day are the best times. If the boat traffic is heavy, these fish get very hard to catch.