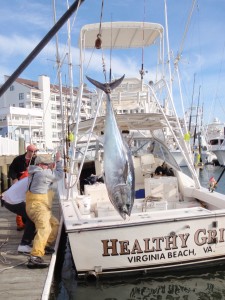 Offshore, big-game fishing in the mid-Atlantic involves long runs to the fishing grounds and the expensive sport fishing boats capable of making that run. An exception to this is the bluefin tuna. The bluefin is the most inshore of our offshore game fish. They can be found out over the one hundred fathom curve but at other times, they will come right into the beach. This makes them accessible to almost any sized boat and sometimes, even in range of surfcasters. 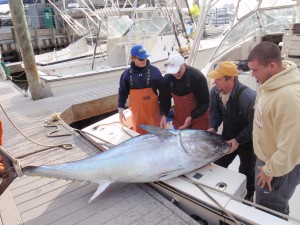 with very short notice. Also, any bluefin tuna that you keep must be reported so that managers can keep a close count of how many bluefin that have been caught. For the most recent regulations and for easy reporting of your catch, visit: hmspermits.noaa.gov . 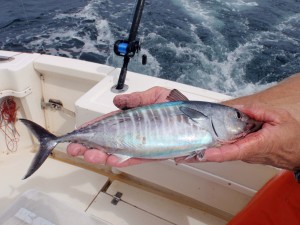 Bluefin tuna get big, very big. Individuals can weigh more than 1000 pounds. Classic tackle used to fish for these giants include bent-butt 130s and fighting chairs and even with these, some bluefin are just too much to handle. On the other end of the spectrum, the crew of the Healthy Grin will often be fishing for bluefin tuna with small spoons and light tackle commonly used to fish for Spanish mackerel. We are targeting the babies for scientific research. Most of the bluefin encountered will fall between these two extremes and tackle can be adjusted based on the class of tuna that you are likely to encounter. 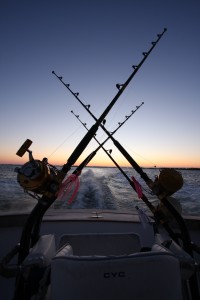 50-pound trolling tackle will handle most of the bluefin tuna that we encounter. When larger fish are around, you may need to break out the bigger stuff. Jigging is a popular and effective way to target bluefin tuna and specialized, flimsy appearing, jigging rods are being used to catch some surprisingly large bluefin tuna. Even spinning tackle has gotten in on the action. Casting top water poppers can be one of the most exciting ways to catch bluefin tuna. 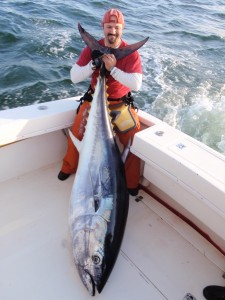 At times, it is very easy to get bluefin to bite. Other times, you will be fishing with the tuna all around you and you cannot buy a bite. That is when it is a good time to try something different. There are many ways to fish for these creatures and they all work, sometimes. When fishing for bluefin, it is good to be prepared to use more than one technique. Trolling, chunking, jigging, and casting top waters each may be the only way that you can get them to bite on a given day. 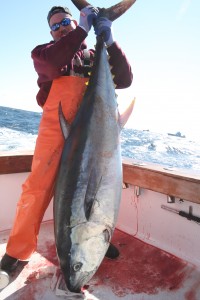 Typically, in March and April, we will catch them off of the Outer Banks of North Carolina. Jigging, popping, and trolling large ballyhoo/Ilander combinations are productive techniques. May is the month we expect them to begin to show on the inshore hills of the Delmarva Peninsula. Places like the Cigar, 10 Fathom Hill, SE Lumps, Hot Dog, 26 and 21 Mile Hills are all prime bluefin tuna locations off of Virginia. Out a little further, the 20 fathom Fingers can be a good location for both bluefin and yellowfin tuna. Typically, trolling is the preferred technique at these locations though at times, the chunk bite will be very good. Big ballyhoo/Ilander type of lure combinations are a popular bait to troll here but large bluefish can also be all over these hills. To avoid rigging a bunch of ballyhoo to feed to bluefish, many will troll artificials like cedar plugs, tuna 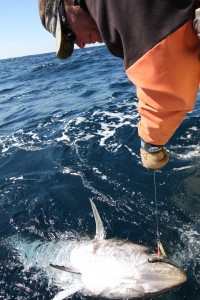 feathers, and Drone spoons. These baits are trolled rather fast, maybe as fast as 10 knots. It is not that a bluefin tuna will not hit a cedar plug daisy chain at 6 knots. The goal is to troll fast enough to limit the bluefish bites. Bluefin tuna have no problem at all with catching a 10-knot bait.

Other times, a slow moving bait will attract more bluefin bites. A blue/white Ilander/horse ballyhoo combination trolled 5 to 6 knots, is hard for any self-respecting bluefin tuna to pass up. When they are in on the beach, crushing baits meant for striped bass, 2-3 knots seems to be the prime trolling speed. 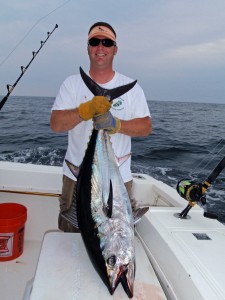 Bluefin tuna are a fish that we have a potential to catch all year long here in the mid-Atlantic. Some years, some will stay on the inshore hills all summer long. Other years, they just visit on their way up north. In the fall, they tend to come on in closer to shore and we will find them at the Triangle Wrecks, the Fish Hook, the Chesapeake Light Tower and on into the beach. Some will hang in Virginia’s waters well into the winter. After that, the water off of North Carolina is the place to be through the first part of spring when we start all over again. 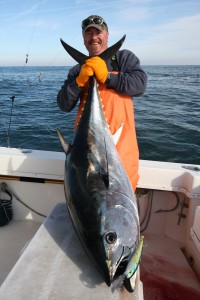 Due to the tremendous value of bluefin tuna as a commercial fish, the population is a fraction of what it used to be. They are prolific breeders and fast growers. A few years of strict fisheries management and the good-old-days will be back. The fishing has been rather good the past several years. Just imagine how good it could be.

If you are looking to experience the excitement of offshore fishing without the long runs to the deep, bluefin tuna may be the perfect fish for you.