winner of Excellence In Craft award

There is a record snow fall in Virginia. We are not talking about a meteorological event though it almost seems that way. Snowy grouper are being caught in impressive sizes and numbers and world records are falling at a blizzard 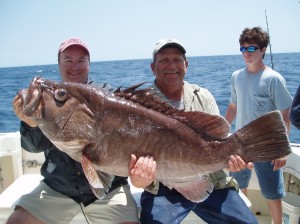 Along the east coast of the United States, snowy grouper are found from Florida to Cape Hatteras with a few smaller fish found as far north as Cape Cod. The world record snowy grouper weighed in at 28 pounds. This was all true until these fish were discovered off of Virginia’s coast. It is not a scattering of smaller fish which have been found but rather an untouched population of record-sized snowy grouper. 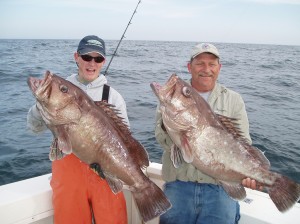 Snowy grouper are a highly sought after catch. Their excellent eating quality makes them a valuable commercial catch and their size makes them a challenging catch on recreational gear. They are protogynous hermaphrodites which means that they all start off as females and some will convert into males as they get larger. Not all fish will convert and what triggers a particular fish to change into a male is not understood. The youngest males are about 7 years old. Females can spawn when they are 4-5 years old or about 18-20 inches long. There has been a noticeable decrease in the percentage of males in the population where these fish are commonly targeted. Fishing pressure is thought to be the cause of this as not as many fish remain in the population long enough to convert into males. This newly discovered Virginian fishery is giving scientists the chance to study the population dynamics of a healthy snowy grouper stock.

Virginia’s snowy grouper were discovered due to another world-record class fishery, the blueline tilefish. Multiple 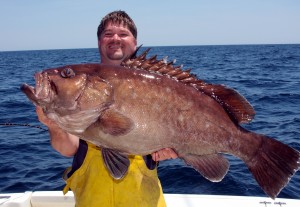 world record bluelines have been caught off of the Virginia coast over the past couple of years and several of those have been caught by the crew of the Healthy Grin. We were looking for yet another record blueline tilefish when a fish bit that felt heavy enough to raise the record to another level. When this fish reached the surface, it was not a tilefish at all but rather our first snowy grouper. It was a big snowy grouper. Well, to us at that time, it was big. It was just shy of the then current world record. Little did we know that this would be one of the smallest grouper that we would catch.

We had discovered a new species to target. None of us were experienced grouper fishermen. We are not supposed 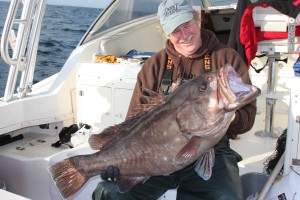 to have grouper in Virginia. We talked to scientists and anglers from areas to our south. We read what information we could find on these animals and we studied charts of the area where we had caught our one fish. We were now grouper fishermen and headed back out to see if we could find some more and maybe catch one big enough to break that world record. Well, we found them.

On our first grouper trip, we caught two grouper. They were so much larger than the existing world record that we had doubts about what species we had caught. Snowy grouper are so named because of the white spots on their sides. Some other grouper species have spots and the spots on a snowy grouper fade as the fish get larger. These two fish weighed in at 36 pounds 5 ounces and 37 pounds 9 ounces. When in doubt go to the experts so these fish were taken to the Virginia Institute of Marine Science. The main question was had we caught world-record snowy grouper or little Warsaw grouper? We are not supposed to have grouper in Virginia so we are not supposed to have grouper experts at the Virginia Institute of Marine Science either. Scientists in South Carolina and Florida were consulted and yes indeed, we had caught world record snowy grouper. Both fish were approved by the International Game Fish Association for All-Tackle World Records, a first for Virginia’s waters. Jeff Dail’s fish was a little smaller than Jason Ferguson’s so Jeff’s fish was approved and then retired immediately. Jason was able to hold his record for awhile, at least until we went grouper fishing again.

We had a few more trips like this where we would manage to catch a snowy grouper or two weighing in at thirty-something pounds each. Nice fish but not large enough to break the record again. We tried some other areas and we 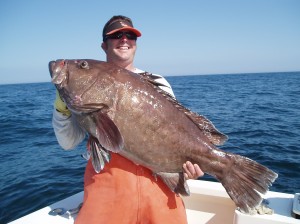 found more snowy grouper and these fish were larger. During our first try on a new location near the Norfolk Canyon, we had an unbelievable morning of bottom fishing. Brothers Ric and Roger Burnley were fishing with us and Roger catches the first record-sized snowy grouper of the trip. Ric soon follows suit with another one. Roger would not let his brother beat him so he caught another one which was the largest of the day. This one set the world record at 49 pounds 9 ounces and established Virginia’s initial snowy grouper state record. On this same trip, Jeff Dail set Virginia’s initial state record for golden tilefish at 44 pounds and Bob Manus set the All-Tackle World Record for Blackbelly Rosefish at 3 pounds 11 ounces.

We now had these fish figured out and continued to set new records. Bob Manus held the snowy grouper world

record for a while with a huge 65.5-pound fish which we thought might be our limit. Soon after that fish, Chris Boyce caught a 66-pound snowy grouper which is the current All-Tackle World Record and the Virginia State Record. We have managed to catch a number of other fish in the sixty-something pound range but so far, Chris’ record stands.

All of these records have generated a lot of excitement and interest in this fishery. Charter boats are now running trips for grouper out of Virginia and more and more private boats are fishing for them. Scientists are studying Virginia’s snowy grouper and are able to study specimens larger than they can get from anywhere else. The typical pattern for a snowy grouper fishery is one of discovery followed by a short time of very good fishing with a lot of large fish caught which is then followed by years of a depressed stock where numbers are down and the fish are small. These small snowy grouper are known as “snow flakes”and they are the snowy grouper which most anglers are familiar with. Very strict regulations are in place to try and bring back the snowy grouper populations from North Carolina and on south along the east coast. We are not supposed to have these fish off of Virginia so there were no regulations for this new fishery.

An unusual thing happened in Virginia. Some scientists, commercial and recreational anglers asked that this fishery be protected before it became over-fished. The Virginia Marine Resource Commission enacted regulations allowing a one grouper per person recreational bag limit and a commercial limit of 175 pounds for the vessel. It is hoped that 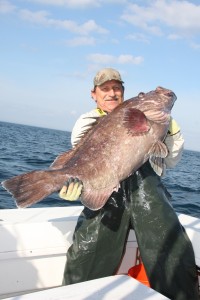 these proactive regulations will keep Virginia’s snowy grouper fishery one of record proportions.

To experience Virginia’s snowy grouper for yourself, you will need to have or charter a boat capable of running sixty miles offshore. Tackle does not need to be large or expensive. These record grouper have been caught on reels like the Penn 320 GTI, the Shimano Torium and other conventional reels of similar size matched with medium action rods. The thin diameter of the braided line you need to use, allows these small reels to hold plenty of line. Use a braided line of about 65 pound test. Bottom tackle is simple. Attached your main line to a three-way swivel. From one leg of your swivel is an one foot or so piece of monofilament which goes to you sinker. Off of the other leg of your swivel is a two to three foot leader to your hook. These grouper have some teeth so this leader material should be of 100 pound or greater test mono. Conventional or circle hooks both work in about 9/0 or 10/0 sizes. Current is usually not too much of a problem off of Virginia so sinkers of 20-28 ounces are plenty to keep your bait on the bottom.

The snowy grouper areas we have found have been in an area from east of the Cigar Seamount to the Norfolk Canyon. Productive bottom is found between 50 and 100 fathoms. You are looking for hard, preferably broken bottom. Ledges, humps or any change on the bottom can hold fish. Watch your bottom machine closely and fish any change. All of these record snowy grouper have been caught on some kind of fish bait, either whole or cut fish. Mullet, spot, croaker, bluefish, mackerel and false albacore are all excellent baits. Getting them to bite is easy once you have found them. 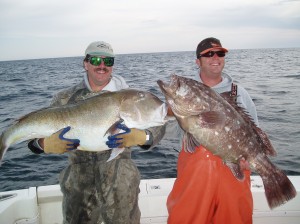 Snowy grouper are supposed to form spawning aggregates sometime during the month of May. We have not found any seasonal tendencies with these fish yet. The grouper bite seems to be on all twelve months of the year. This means that if you want to experience a world-record class fishery, try bottom fishing the offshore waters of Virginia. The bite is on right now.