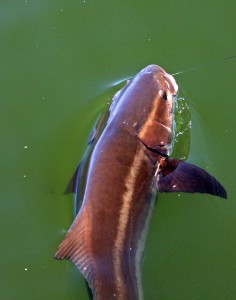 The cobia, arguably. is the most exciting fish to catch in the Chesapeake Bay. They get big, with some weighing in at over 100 pounds. They fight hard with a combination of strong runs down deep and surface head shakes with some airing out of the water completely. Cobia are famous for going crazy at boat side and inside the boat once landed. They can offer a challenge to get a bite while at other times, they can be ridiculously easy to find and will attack anything you put in front of them. Cobia are considered good table fare and a single nice fish can feed you and all of your neighbors. 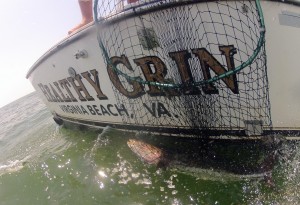 Cobia typically arrive in the lower Chesapeake Bay sometime in May and will hang around through the month of September. They can be caught using several techniques each of which may be the most productive depending on weather conditions and when in the season you are fishing. 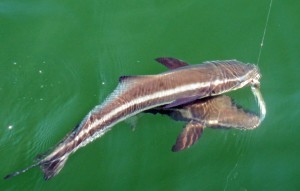 One technique is to anchor in good location and deploy a chum slick to bring the fish to you. Serious cobia anglers will procure fresh menhaden and grind up their own chum. They will mix in extra menhaden oil prior to freezing it. The chum is deployed in a chum bucket full of holes that allows the chum to disperse as the block of chum melts. Some anglers will just have a weighted chum bucket down near the bottom while others will deploy an additional chum bucket on the surface. The color of the chum bucket is important to some with black being the favored color. Baits are live eels, fish (spot, croaker, and bluefish are commonly used), and menhaden chunks. Baits are fished on the bottom with fish finder rigs with the most productive bait typically being the one placed directly behind the chum bucket. 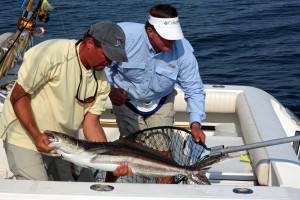 Chumming is effective throughout the season but is typically most productive earlier in the season. It also becomes the most productive technique when weather conditions interfere with sight-fishing. A brisk northeast wind really favors this technique. Popular locations are various hills in the lower Chesapeake. Some include: York Spit, Bluefish Rock, Latimer Shoal, and 9-Foot Shoal. Anchor up on the edge of the hill in a location that has the current flowing your chum down the slope of the hill. 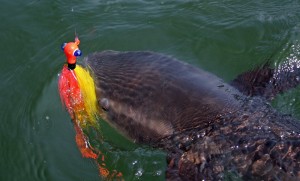 Sight-fishing has become the most popular technique to target cobia. You get to move around looking for the fish making it more of a hunting event. Again, this technique can be used throughout the season. It becomes more productive later in the season. Sight fishing is best when there is a cloudless sky with bright sunshine, the water is clear and there is not too much wind. This is not the technique to use on a rainy, windy day. Boats that have a raised driving station have an advantage with this technique. The cobia are easier to spot from a higher view point. 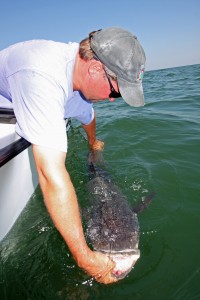 It is a simple technique consisting of slowly cruising around looking for cobia swimming near the surface. A good pair of polarized sunglasses is a must. When you spot a cobia, cast your bait out in front of it. As with most things, it is not quite as simple as it seems. Some are much better than others at spotting the fish. Once spotted, you need to see which direction the fish is moving and be able to position your boat in the right location to be able to make a good cast and do so without spooking the fish. Knowing where the best concentration of fish is allows you to be in the area that gives you the best chance of cobia encounters. In general, sight fishermen will work the water between York Spit Light on out to the CBBT during the middle of the season and follow the fish out to the mouth of the bay and down along the oceanfront as the season progresses. It is good to have a network of fellow anglers that communicate with each other as to where they are seeing fish. 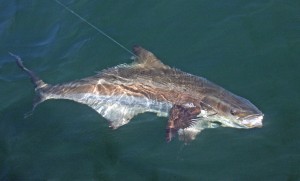 Baits will consist of live eels and bucktail jigs with some type of trailer attached to give it more action. The eels are simply placed on a plain hook, cast in front of a cobia and allowed to do their thing. The jigs, about 2 oz, are cast out past the cobia and worked back to the boat. One of the best cobia captains, Capt. Jorj Head, likes to use brightly colored jigs mostly so he can easily see them. He really does not want the cobia to be able to get a very good look at the jig. He works his jigs fast with quick, sharp jerks. Doing so, he can elicit reaction strikes from cobia even when they are not actively feeding. 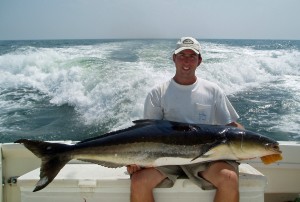 A third technique to target Chesapeake cobia is “running the buoys”. Cobia like to stage around the buoys of the main channels entering the Chesapeake Bay. They will also hold on the pilings of the Chesapeake Bay Bridge Tunnel. Like sight-fishing open water, baits will be jigs and live eels. Often you will come up on a buoy and see one or maybe a dozen cobia circling the buoy on the surface. Other times, you do not see them at all but they may be there down deeper and a jig worked past the buoy or an eel dropped 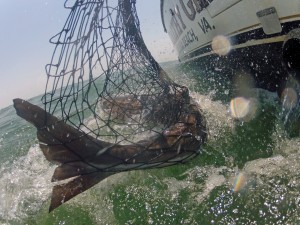 down beside it will bring them up to the top. This technique works best during the second half of the season as that is when more fish are holding on these structures. This is a technique that does not require excellent visibility or high viewing platforms allowing it to be used in a wide range of weather conditions and from most any boat.

You can find Healthy Grin Sport Fishing on Facebook and you can visit: vbsf-hookedup.net/healthygrin