The Beasts of Fall

Trolling for the Beasts of Fall 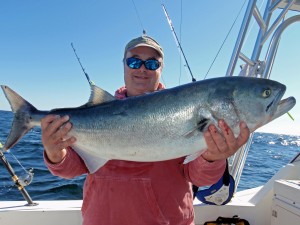 With the arrival of the fall fishing season, area anglers catch an intense case of striped bass fever. It is amazing the number of boats out there targeting these fish. Often, there will be more boats on the water than during the height of the summer season. By regulation, these boats must be fishing within state waters, within the 3 nautical mile line. In order to target the true beasts of fall, cross that invisible line and experience some of the best fishing of the season. 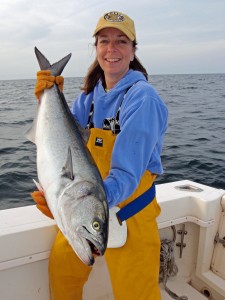 These beasts will come in all the way to the beach but to experience the most consistent action, you need to move out 20 to as many as 40 miles off of the beach. The corridor from 26 Mile Hill (Hambone) on down to the SE Lumps and the 10 Fathom Hill, including locations like the Fish Hook and the Hanks wreck is the prime area. If this seems like too large of an area to explore, just go to the Chesapeake Light Tower and fish from there to the Triangle Wrecks. This is prime beast hunting grounds.

There are many methods to target these beasts but we are going to keep it simple. Put out a spread of swimming plugs and start trolling. Lures like the Rapala Magnum and Mann’s Magnum Stretch 30+ are good choices. Though these beasts have teeth, wire leaders are not required. Thirty-pound class tackle is a good choice for most of these beasts. You may need to beef things up a bit for the largest specimens. 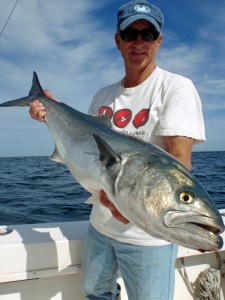 What are these fall beasts? There are several. We will start with bluefish. These are not the little bluefish that you have played with all summer long. These are full-grown choppers with the largest weighing over 20 pounds. They will arrive in October and will stay to see in the New Year. These fish are just plain mean. They are very aggressive feeders and very hard fighters when hooked. They will tear up your tackle but it is worth it. They are easy to find when they are chewing up fish on the surface with birds working over them. They are around even when you cannot find any bird activity. Just start trolling and keep an eye on your fish finder. You can run across them anywhere but working around the various wrecks out there will increase your chances of coming across them. Sometimes they will be right over the wreck but work the whole area. Have two other rods ready when trolling for big blues. Have a vertical jigging rod ready so you can drop a jig down to any deep fish marks you see on your fish finder. This can be the ticket when the fish are feeding deeper than your swimming plugs will dive. Your other spare rod is rigged to cast a surface popper. When you do run across chopper blues busting the surface, catching them on top waters is an absolute blast. 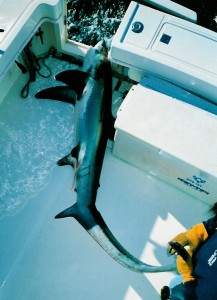 The second beast that we can catch on the troll is the thresher shark. These strange looking sharks follow the schools of bluefish. These beasts are large. The average thresher you catch out there will be about 200 pounds with some being over 500 pounds. Like the mako, this is one of the sharks that can commonly be caught on the troll. Unlike the mako, the thresher does not attack teeth first. The long, whip-like tail is their weapon of choice. They will whack their intended prey with it, turn and casually eat the stunned fish. You will know when a thresher hits your lure by an extremely quick screaming of drag. You will know that it has hooked itself in the tail when the drag keeps screaming and a several hundred pound missile comes flying out of the water. Thresher sharks can be very aerobatic fighters and a real thrill to catch on lighter tackle. 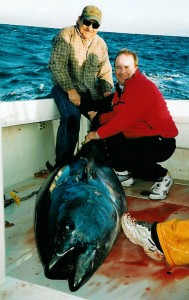 The third beast that will inhabit these same waters, during the fall, is the bluefin tuna. On average, these fish will be between 50 and 150 pounds but beasts greater than 600 pounds have been caught within sight of the Chesapeake Light Tower. Each year, some of these fish will come in close enough to shore to encounter the striped bass fleet and give some unprepared striper angler a real surprise. They are more common a bit further offshore though they are more of a coastal fish during their fall run than during the spring run up the coast. They tend to arrive later than the big bluefish and threshers which show in October. Typically, the bluefin schools get here mid-November and some fish will hang around well into December. The largest bluefin seem to roll through pretty quickly down to Hatteras and Morehead while the 100-pound class fish hang around up here. You can catch them trolling the same 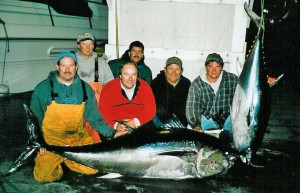 plugs that you are trolling for bluefish. When big bluefin are around, you may want to add a couple heavier rods and put out some horse ballyhoo way back in your spread. Just as with bluefish, having jigging tackle ready to drop and a topwater popper ready to cast can get you some extra bites. Just be sure that you are ready for what you are getting yourself in for. 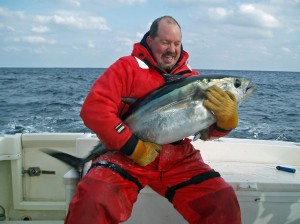 At times 30 miles off of the coast, we have run into pure bedlam during the fall. Birds are dropping out of the air, bluefin tuna busting out of the water and big whales all around. When we have run into this, we have found bluefish, bluefin tuna, striped bass, and whales all mix together feeding on hoards of little baitfish like sand eels. Thresher sharks are around whacking their tails, absolutely crazy fishing. Experience this once and you will be addicted to hunting the beasts of fall.