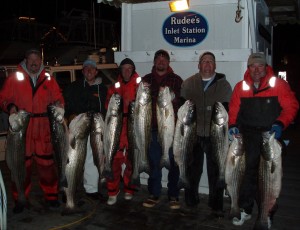 Nighttime is the right time to be at the Chesapeake Bay Bridge Tunnel for jumbo-sized rockfish. Resident rockfish can be found at the CBBT all-year-round but if you are after that trophy-sized fish, you will want to be there during the month of December. Typically, it will turn on around Thanksgiving and remain good until the bay season closes on New Year’s Day. 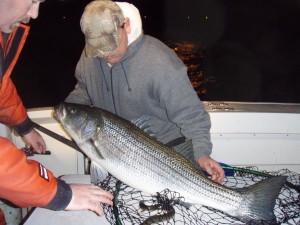 Big fish can remain at the CBBT throughout the winter but most anglers will move out into the coastal waters by the first of the year to fish for them in waters where the season is still open. Catch and release action can be very good at the CBBT after the season closes and you will have the bridge mostly to yourself. February can be a particularly good time as those large ocean fish stage at the CBBT as they prepare to move into the bay on the way to their spawning grounds. 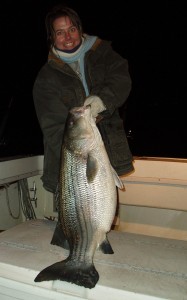 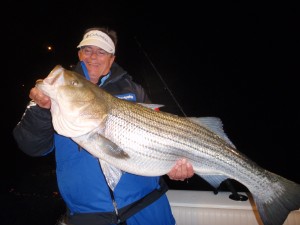 There are numerous methods to target these fish and they all work. Trolling lures along the pilings is an effective technique. Anglers troll along the up-current side of the bridge so that the current pushes their baits towards the bridge and the light line. Good boat handling is needed to get your baits close to the bridge while keeping snags to a minimum. The sheer number of boats at the CBBT makes this a difficult technique to use these days. 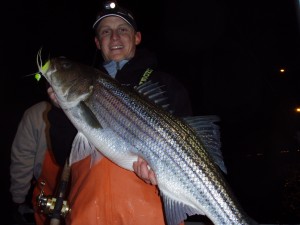 Casting jigs, swimming shad-type lures, and even fly fishing is very productive. You can position your boat outside of the bridge and cast back in towards the pilings and the light line. Some will position their boats under the bridge, in the shadow, and cast out towards the light line. On calm nights, you can see the fish lined up inside the light line and you can cast to individual fish, picking out the ones you want to catch. Some of the boats doing this will turn off all of their lights to better see the striped bass. This is very dangerous as other boats cannot see you under the bridge. Be aware while navigating around the CBBT at night, there may be some boats out there without their lights on. 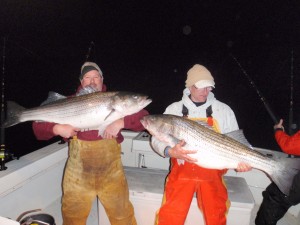 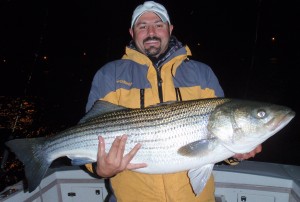 Anglers targeting the largest rockfish will mostly be fishing with eels for bait. There are a number of techniques used. You will find fish holding on the down current side of the bridge, holding in the eddy made by the piling. Tying up to the piling makes fishing in this eddy easy. You are not supposed to tie off to the bridge but some still will do it. You can fish the eddy, without tying off, simply backing your boat up near the piling. This allows you to move from piling to piling until you find the hot one. When the current is light, it is easy to pull up to any piling. When the current is ripping, the big pilings in the high rise area of the newer span provide a big eddy that is easier to fish. Pull up to the piling and drop your eels down, trying various depths and see if anyone is home. 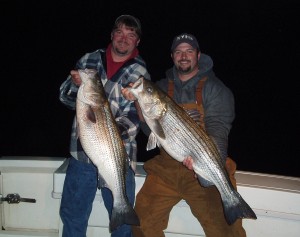 Depending on the wind and current, you can fish eels around the pilings while drifting along or through the bridge. Again, try fishing at different depths. 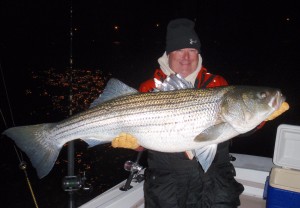 The most popular technique is to anchor up current of the bridge and drift eels back towards the light line. Position baits just outside and inside the light line and near the pilings. The basic rig is an egg sinker above a swivel with a leader on down to the hook. The size of the egg sinker can be varied or even removed. A float can be used to suspend the bait. Again, work different levels of the water column to find where the fish are actively feeding. As the current speed changes, you may need to reposition your baits. When the tide changes directions, it is time to re-anchor on the other side of the bridge.