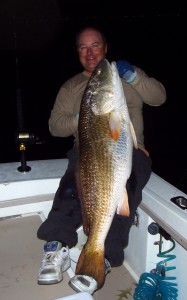 Red drum were commonly known as channel bass in the mid-Atlantic. That name is not used as much anymore and some young anglers would not even know what a channel bass is. To our south, they are called redfish. This name is still used and a Louisiana favorite, “blackened redfish” became a popular menu item in restaurants across the country. Other names refer to size. Puppy drum are small red drum. These are the fish that the popular redfish tournaments target. The largest red drum are often referred to as “bull reds” and there is no place better to catch a bull than the Chesapeake Bay area of Virginia. There is no time better to catch them than the Spring.

The popularity of red drum as a food fish led to a near collapse of this long-lived fish. Through this downturn, a healthy fishery for large red drum was maintained in Virginia’s waters. This may have been due to a strong catch-and-release ethic which exists among trophy red drum anglers of the region and we may have a fairly distinct, local population of red drum. Now red drum are strongly protected coast-wide and all large red drum must be released. Regulations vary from state to state but all red drum over 27 inches long are now let go to enter into the spawning population. This, coupled with several strong spawning years have resulted in a rebound of red drum stocks along the Atlantic Seaboard and in the Gulf of Mexico.

We have a long red drum season in Virginia. Reds of some size can be caught pretty much all year but the run of big 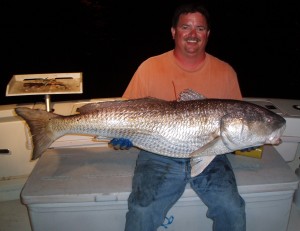 bulls will begin in April. Veteran drum fisherman look to the full moon of April to signal the start of the trophy red drum fishery. This fishery will be red hot through the months of May and June. Towards the end of June, the fish seem to scatter out and so do the anglers that were targeting them. Some large red drum will be caught all summer long by anglers fishing for cobia and flounder. There will be another run of bull reds in the Fall which is very good most years but for a sure bet, get out there for the Spring run.

The first big red drum of Spring run will be caught on the seaside of Virginia’s Eastern Shore. These fish will be caught by surf fishermen working the beaches along Fisherman’s and Smith Islands and by boats fishing the inlet between these two islands. Inside of these islands is Magothy Bay. These waters warm up quickly and big reds can be found cruising here early in the season. During the month of May, bull reds will continue to be caught along the Eastern Shore beaches but more will be caught on the various shoals near the mouth of the Chesapeake Bay. Nautilus Shoal, Latimer Shoal, and Nine-Foot Shoal will be the home of roaming schools of large red drum. The area near red nun buoy 10 on the ocean side of the high rise of the Chesapeake Bay Bridge Tunnel is another great area to catch trophy-sized red drum. This area is particularly good later in the spring run.

There are a variety of successful techniques used to target springtime bull reds. At times, you will encounter a school of actively feeding fish. These fish may be breaking the surface and have birds working over them. When they are like this, it is ridiculously easy. Cast to them! Plugs, spoons, and jigs are all effective when you find a school of big red drum in a feeding frenzy. 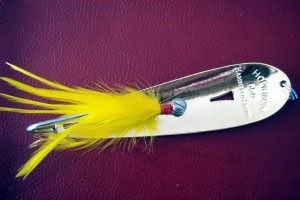 Trolling can be an effective way to target large reds. Spoons are the lure of choice when using this technique. Spoons like the 3 ½ Drone, #19 Pet, and other similarly sized spoons are all good choices. My favorite spoon for this application is the 550 Hopkins with a hammered finish and a yellow feather. Spoons with a silver color work great but there are days when a gold colored spoon cannot be beat. Tie your leader directly to the spoon, no snap swivel. The leader is about 20 feet of 80-pound test monofilament. The other end of the leader is attached to a trolling sinker with a snap swivel. A sinker in the 6-8 ounce range works great. Troll your spoons along the seaside of Fisherman’s and Smith Islands and over and around the shoals. Troll slowly with the spoons far behind the boat. Much of the time, your sinker will be bouncing along the bottom stirring up a commotion while your shiny spoon is fluttering along behind it. This signals to a big bull red that there is something here to eat! While many of your bites will be in the blind, trolling can be a visual game. As you troll along, look for fish or for color changes in the water which can be a sign of a school of big red drum. Don’t troll through the fish but rather troll in front of them so that your spoons will cross their path. When you do this correctly, every line that you have out will go down at once.

While some red drum sharpies will spend most of the spring trolling spoons, most will be anchored up while fishing with natural baits. A standard fish-finder rig is used with a pyramid sinker of about 6 ounces. Hook size is about 8/0. Both circle and J-hooks are used. Circle hooks will deep-hook fewer fish while J-hooks are easier to use with some baits. The baits used are either fish or crab. Fresh cut bunker, mullet, and spot are good baits. A half of a peeler crab is an excellent bait and is probably the favorite bait for Virginia’s springtime red drum. A challenge when fishing with cut bait and peeler crab is the abundance of life at the mouth of the Chesapeake Bay. Small bait stealers can be a nuisance, clear nosed skates and the various small sharks can be a problem, and the several species of jumbo-sized stingrays will test you and your tackle. Using live spot and croaker as bait will solve the problem with bait stealers and clear nosed skates and no self respecting bull red can pass up a lively croaker snack. What has become my personal favorite bait is a whole, live hard crab. We will remove the claws and will usually take a pair of scissors and cut off the tips of the spines on each end of the shell. Place the hook up through the bottom shell and out through the top shell somewhere near the rear of the crab. A live hard-shell crab does a good job of avoiding most of the bay’s predators but to a big red drum, it is just another meal.

Red drum will feed throughout the day and night. Trolling spoons is a daylight endeavor. Bait fishing will work day and night but the dark hours are the prime time to anchor up on the shoals and fish natural baits. The shoals are not a flat expanse. Look for ledges where there is a change in the water depth. Anchor on the edge of a change to increase your chances of encountering a roaming school of red drum.

These fish can be caught on light tackle but this may greatly extend fight times especially when at anchor with a hard running current. Tackle in the 30-pound class is a good choice for this fishery. Shorter fight times will give these fish a better chance to survive the catch-and-release experience.

You will need to have a plan in place once you fight one of these bruisers to the boat. The best way to land them is to use a very large landing net. You can reach down and lip them if you have a sturdy pair of gloves on. Red drum have teeth. They are not like a shark or a bluefish but you do not want to lip one with your bare hand. Once in the boat, these fish are usually docile, allowing you to measure them and take photographs. When you release them, some of these fish will be ready to swim right away. Others will need to be held, facing into the current, for a few minutes before recovering enough to swim on their own.

A Study of One 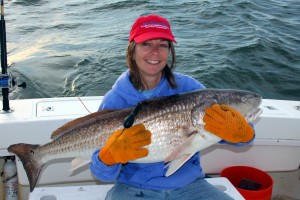 After you release a big red drum, what happens to it? Does it live? Where does it go? The answer is: we do not know. These fish have been a part of the Virginia Game Fish Tagging Program for many years but we have very, very few tag returns from large red drum. Many large red drum have been tagged along the Outer Banks of North Carolina (another hot spot for trophy reds). We do not catch those tagged fish during our Virginia fishery. Are they separate populations? We have the technology to find the answers to these and other questions about mature red drum but it is expensive. Pop-up satellite tags cost around $4,000 each. They record a tremendous amount of data which is transmitted to a satellite when the tag releases from the fish after a preprogrammed amount of time. I was given one of these tags and the first red drum pop-up tag study was done. This tag was programmed to release after one month. A single fish does not tell us much but it is a start. This particular fish was caught near buoy 10. It was deep-hooked. The leader was cut and the hook left in the fish. After being tagged with both a satellite tag and a normal tag, the fish was held for photographs and released. This fish survived. It remained in water ranging from 60 to 78 degrees. The fish went as deep as 56 feet but it spent most of its time in shallow water from 0 to 16 feet deep. In 30 days, this fish did not travel far. It ended up next to the beach near the Concrete Ships at Kiptopeke. More studies with longer tag times will be conducted so that we can find out just what these fish are doing.

This Spring, Dr. John Graves of the Virginia Institute of Marine Science will be conducting a study of large red drum in conjunction with the Virginia Game Fish Tagging Program. Red drum will be double tagged with both pop-up satellite tags and conventional tags. The pop-up tags will release after various times on the fish. The conventional tags rely on angler recaptures. If you see a pop-up tag floating in the water or washed up on the beach, pick it up. There is a reward of $100 for each pop-up tag returned. These tags can be refitted and used again at a fraction of the cost of a new tag.

To discover more about the research of Dr. John Graves, visit: http://www.vims.edu/about/directory/faculty/graves_je.php