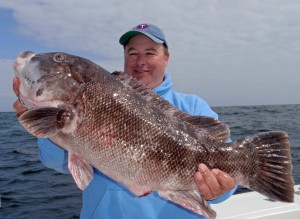 Togs, commonly known as blackfish up north, are an ugly fish that fight hard and taste good. They have become more popular in our area as more fishermen seek to extend their fishing season. Tautog can be caught all year long but are mostly sought after from October through May. They can be found anywhere there is structure. Popular areas include the CBBT, Back River Reef, the Cell, Tower Reef, the Concrete Ships, Cape Henry Wreck, the Santore, the Winthrop, the Triangle Wrecks, and any other wreck or structure that you can find.

The choice of location will be affected by water temperature. When the water is below 40 degrees it is difficult to catch tog, above 44 degrees is best. In the dead of winter, you may need to move to wrecks farther offshore in order to find water warm enough. During a mild winter, fish may be active in the bay all winter long.

The simplest way to begin tautog fishing is to go to one of the popular areas and fish with a high-low bottom fishing rig. Tackle should be on the heavy side, in the 20-30 lb class. You will see people using anything from light spinning tackle to 50 lb stand up gear. The key is to be able to hoist the fish away from the structure before it can make it back to its lair. If you do get hung up, you may get free by bouncing your sinker up and down. If you have a fish on, you can try giving it slack, and sometimes, it will swim out of its hole for you. If nothing else works, pull hard until something gives. You will lose rigs tautog fishing.

Serious tog fishermen tie their own rigs and try to fish areas without much fishing pressure. A common rig consists of a perfection loop at the bottom with a dropper loop a little ways up. This can be done directly to the fishing line if it is heavy enough or separate leader material can be used. A hook is attached to one loop and a sinker to the other. Hook size will range from 1/0-4/0 depending on the bait used and the size of the fish being caught. Sinker size depends on the current and on the depth of the water.

Primary baits consist of crab, clam, or a combination of both. The clam is cut into strips like those for spadefish, including a piece of the foot in each strip. The hook is run through the foot portion and then through the belly of the strip. Almost any kind of crab can be used. Small crabs, like fiddlers or mud crabs, are used whole. Run your hook in through a leg socket and out through the rear of the crab. Blue crabs are sectioned after popping the top shell off. If the current is causing your line to twist, break the legs off the crab. Squid will work if the fish are aggressively feeding.

Getting your boat over the structure can be a challenge. To fish the rubble at the base of the pilings of the CBBT, tie to the piling. A Danforth anchor can be used in some areas by running up current of the structure and letting out anchor line until you are over the structure. A wreck anchor, made from concrete reinforcement rods, is necessary in many areas to hook to the structure. The rods can be straightened to get your anchor back. Tautog can be concentrated in very small areas. If you are not having much luck, try pulling in or letting out a little anchor line, fish on the other side of the boat, or turn your steering wheel before you pull anchor and move.