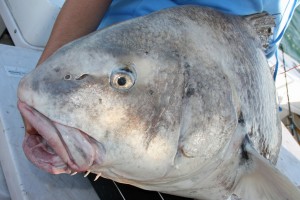 They have a face that only a mother could love. They lack the beautiful red-golden glow and the more streamlined body of their close cousin, the red drum. They do not give you the blistering runs or acrobatic leaps that are the trademarks of some of the more popular game fish. While considered a delicacy in a few localized areas, they are not highly thought of as table fare. After cleaning one of these armored plated behemoths, most anglers decide that it is just not worth the effort. By most measures, the adjective that describes this fish is, “dull”. 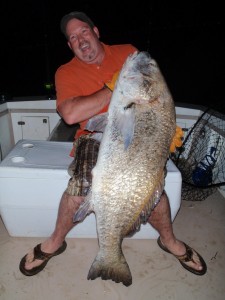 The Black Drum has at least one attribute going for it. They get big, very big. They are one of the largest of the inshore fish that we have to fish for each year. The IGFA All-Tackle World Record is 113 pounds 1 ounce. That fish was caught in the Delaware Bay. Virginia’s State record is just under that at 111 pounds. Fish pushing the 100-pound mark are encountered each year. Their sheer size and resulting power make fishing for black drum anything but dull. 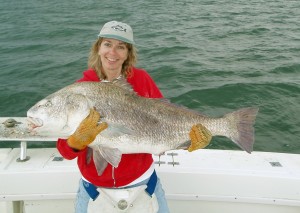 Black drum arrive each year sometime in April. We will first encounter them along the surf and inside the seaside inlets of the Eastern Shore. By May, they can be found along the bayside of Eastern Shore. May is our prime month to fish for them. There is a fishery for them throughout the summer around the islands of the Chesapeake Bay Bridge Tunnel (CBBT). 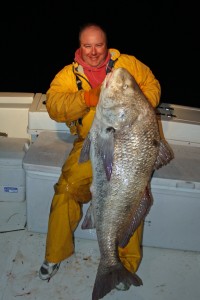 During the month of May, you will find fleets of boats anchored up on the prime black drum areas. Find Latimer Shoal, near the mouth of the bay, on your chart and you will be in the general area. Most boats will be fishing to the west of the shoal in 20-24 feet of water. There will be a fleet of boats associated with buoy 16 near the north end of the shoal in the general area known as the “Cabbage Patch”. Closer to the high rise section of the CBBT, there will be a fleet near buoy 13. A third fleet can be found on the ocean side of the high rise, northeast of buoys 8 and 10. 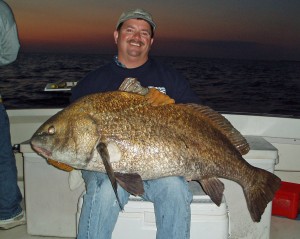 The general technique is to anchor up in the area you want to fish. You can cruise around a bit and look for the drum on your fish finder and anchor up-current from them. If the bite is on with other boats fighting fish in the area, just get anchored up and start fishing. The bait of choice is clam. Both chowder and sea clams will work. Many prefer to use the larger and tougher sea clam. Chowder clams are easier to keep alive and are easier to acquire for those of us that live on the western side of the bay. 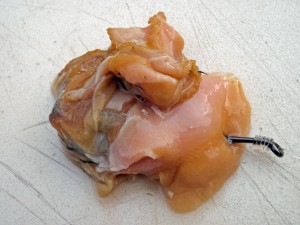 Place a large amount of clam on an 8/0-9/0 hook on a fish-finder rig with a sinker heavy enough to keep it on the bottom. Now you have to decide what to do with your rod. The easiest thing to do is to put out a number of baits in various locations behind the boat, put the reels in gear with fairly light drag settings, and place the rods in rod holders. When the rod bends over and drag is being pulled, it is time to start fighting your fish. 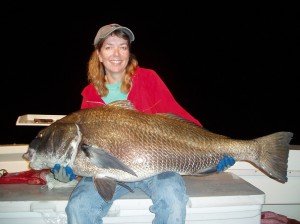 This actually works a fair amount of the time. Some like to leave their reels in free-spool with just the clicker on and engage the reel and set the hook as the fish moves off. There are times that these large fish will have such a subtle bite that you will not even know that your clam is gone. When the bite is like that, you may need to hold the rod to be able to feel these gentle bites. Typically, we will start with the rods in the rod holders, reels in gear, and pay close attention to the rod tips. We will adjust our technique as needed. It is a good idea to check your baits often. 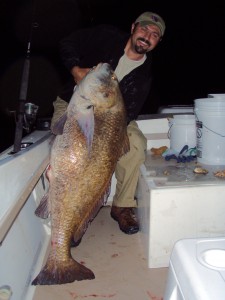 Black drum can be caught all day and night. The best bite often seems to be in to late afternoon on into the evening. Most of these fish are released. If you are going to keep a fish, instead of putting it in your cooler, you may want to make a rope stringer and keep it in the water. A black drum drumming away behind your boat can help draw and keep the school near you. Another thing you can do to help draw the fish to you and to keep them there is to crack the shells on extra clams and dump them overboard. We will “seed” the area when we first set up and periodically throughout the trip especially when the tide changes. Left-over frozen clams from previous trips are good for this. Use fresh clams on your hooks. 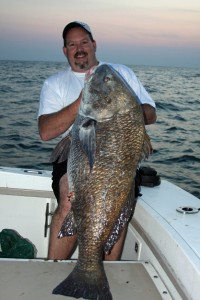