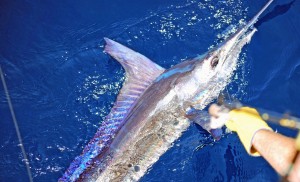 From the middle of August through the month of September, we live in one of the best billfish destinations on the planet. Boats from New Jersey to North Carolina catch blue marlin, sailfish, and an absolutely amazing number of white marlin during this time of year. Riggers full of release flags are a common sight. A multi-million dollar industry has developed around this white marlin bite. Big tournaments like the White Marlin Open and the Mid-Atlantic $500,000 are scheduled to coincide with the marlin run. The largest white marlin weighed in these tournaments results in a big paycheck. They are not always white marlin. 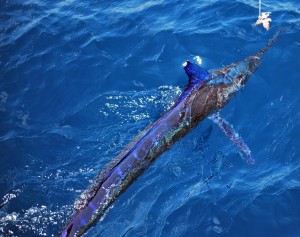 roundscale with the hatchet dorsal and electric blue forehead

Along came the wonderful world of molecular genetics. The DNA proved that the hatchet marlin is not just a myth. It just is not a marlin. Even though it looks a lot like a white marlin, this “new” billfish is actually a spearfish. 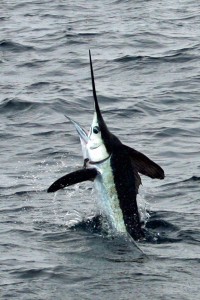 The big billfish tournaments are a lot of fun. They are a big boost to the local economy. They provide food for the local food banks. They raise money for charity. They are also a great resource for fisheries scientists. Tissue samples have been collected and saved for many years. When these samples were tested, it turns out that a good percentage of weighed in “white marlin” have actually been roundscale spearfish. 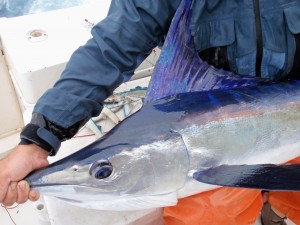 Roundscale, no spots on dorsal and stippled apperance of scales.

Most of us do not have DNA sequencers in our boats. So how can we know if that white marlin we caught is in fact a white marlin? Actually, now that we know these creatures are out there, it is fairly easy to tell them apart. We have caught a lot of white marlin on the Healthy Grin. Based on the tournament tissue sample studies, I assumed that we had caught a number of roundscales also. But now that we have actually caught roundscales, I do not think that we had. These fish really do look different. They act differently also. 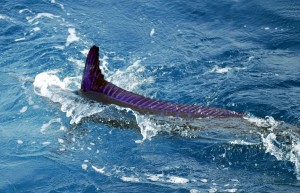 Roundscale with less of a hatchet dorsal 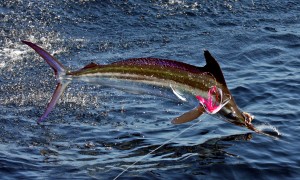 White Marlin showing off spots on the dorsal fin 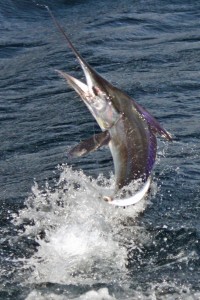 What in the world is a branchiostegal? I had to look this one up and have it explained to me. The fish has a gill plate. Now look at the throat area of the fish. There is a tissue that runs from the throat to the gill plate. Where this tissue attaches to the gill plate, how far back it goes, varies with the different species of billfish. I think it was scientist/artist, Guy Harvey who first keyed in on the fact that the branchiostegal length is longer on the roundscale than on the white. It is something to look for and if you have an artist’s eye, you might key in on it but there are easier things to look for. 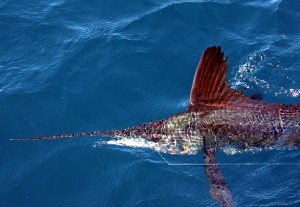 Rounded dorsal of a white marlin

The scales on a white marlin are not very noticeable. The roundscale has very distinctive scales that give the fish a stippled appearance.

A lit up white marlin is a beautiful thing. 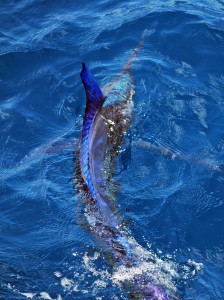 Compared to a spearfish, it is downright dull. The roundscale looks like a bright neon sign coming to the boat. It has a vivid electric blue glow in the forehead area. The fins are cobalt blue. Brilliant, vertical stripes will make you think that a striped marlin is visiting from the Pacific. If your white marlin is brighter than any that you have ever seen, take a closer look. You may have a roundscale spearfish. 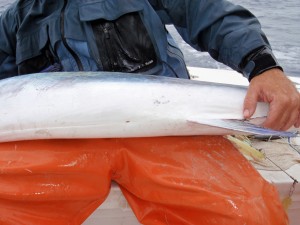 From personal experience, the roundscale spearfish is just meaner than a white marlin. If 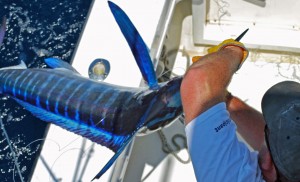 you hook them up at the same time (which we have done), the white marlin will be released while the roundscale angler will be working up a sweat with plenty of fight left to go. When you finally do get the thing to the boat, they are still mean. We have had several roundscales attack the boat and one actually broke its bill on the side of the Healthy Grin. 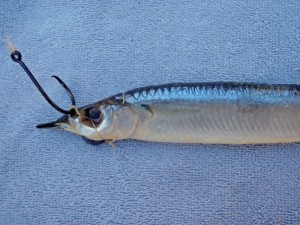 We do not know much about these creatures. They seem to be mixed in with white marlin here in the mid-Atlantic. We catch them the same way we catch white marlin. During a large tagging study of white marlin, primarily done in Venezuela, a total of zero roundscale spearfish were caught. We do not know much about the range of these fish. Dr. John Graves, of the Virginia Institute of Marine Science, is starting to look at the roundscale spearfish in the mid-Atlantic. Pop-up tags are being placed in both white marlin and roundscale spearfish caught in the same area and time. Do these fish remain together after they leave our area or do they go in different directions? We will know more when these tags start to pop off next year.