September is here which means that it is time for the best white marlin fishing of the year. Last September, boats were catching over 20 whites a day and the Backlash, captained by Steve Richardson, released 42 marlin in one day. We have already had a very good billfish year in the mid-Atlantic. There is every reason to expect this September to be white hot again. Right now, we live in one of the best billfish destinations in the world.

Many white marlin are caught while fishing for tuna and dolphin, but to target these fish, a few changes are in order. Basically, simplify your spread. White marlin will come in and attack anything but it is much easier to hook them on a plain, naked ballyhoo. Put away your big rods, spreader bars and all of your fancy tuna stuff. Break out your 20s and 30s and troll naked ballyhoos in the flat line positions.  Troll another off of each outrigger and you have your white marlin spread. It does not get much more simple than that. 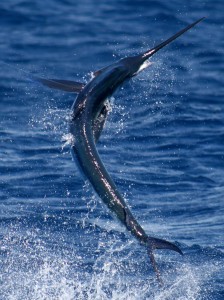 Simple is good but our goal is not to bore the marlin into submission. We want to fire that fish up! Now is the time to be a tease. Pull a teaser off of each rigger. All kinds of teasers are used. A good white marlin teaser is a rubber squid daisy chain followed by a large ballyhoo-Ilander lure combination. When a fired-up marlin comes in to eat your teaser, take it away from it and feed it your naked ballyhoo. The outrigger teasers run on the surface but the most important teaser will be under the water. This teaser will “dredge” those billfish up from the deep.

The dredge can be made from artificial, rubber fish, natural ballyhoo or mullet, or with strips of holographic images of fish. They all are designed to appear as a bait ball and they all work. The dredge needs to be pulled down under the water, out of all of the surface turbulence so you will need to put enough weight in front of it to keep it down. You can pull your dredge off of downrigger or just tie it off to a cleat. 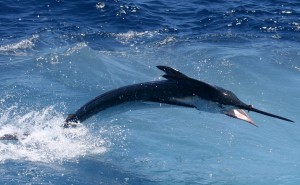 Now, you have your basic white marlin spread so a blue marlin is going to show up. There are a couple of ways to be prepared for this. One is to have a pitch bait rod ready with a larger bait. It is actually good to have two pitch baits ready. One rod with an additional white marlin bait and another rod with larger bait for a blue. When the blue marlin shows up, take away the teaser or little bait it is on and feed it your larger pitch bait. Another thing that you can do is to add a blue marlin bait or two to your spread, something like an Islander/horse ballyhoo combination or a Spanish mackerel. I will pull these in the short rigger position for a total of 6 baits in the water. Typically, a blue marlin will go to one of these or one of your teasers. For white marlin, these additional baits become more teasers. 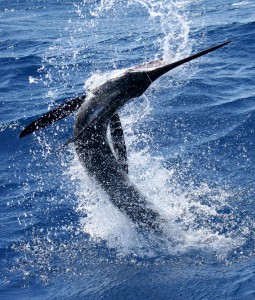 In general, keep all of your baits in tighter to the boat than you would while trolling for tuna. Your boat is the biggest teaser you have and you want to be able to see all of your baits and the billfish that is coming in to eat them. Now is the time to pay attention. These critters can be very sneaky. It is hard to believe that something so large can get into your baits without you seeing them but it happens…a lot.

The goal is to have the rod in your hand before the fish gets to your bait. When the fish tries to eat your bait, feed it to him, “drop back”. A good drop back is a little tricky to develop. You want that bait to fall back as naturally as possible. The fish should feel no tension at all. I don’t think that a little tension actually bothers the marlin but it just makes it little more difficult for it to process the bait. Instead of it swallowing the bait and you achieving a hookup, the fish holds the bait sideways and you end up bringing back a ballyhoo head. Clickers need to be off and get your thumb off of the spool. Let the line fall from your rod tip into the water. The drop back does not need to be long but it does need to be smooth and free. With these small, naked baits, a drop back of five seconds in plenty. If you miss the fish, get your rod tip up and crank the bait back up to the surface. If you still have a ballyhoo, hold it there and be ready to drop back again. If you just have a ballyhoo head, crank it on in and get that bait out of the water. 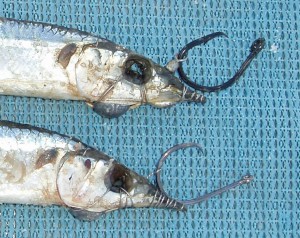 This time of year, these fish will be feeding in packs. When one is in your baits, others are probably there also. Every angler on the boat should be manning a rod. When you get one hooked up, keep trolling and see if you can get more. Make a circle to the side of the hooked fish and watch the other baits. If you don’t raise anymore fish, get your stuff in and go get your fish.

These fish will be concentrated in certain areas. Some years, they may be as far out as 1000 fathoms. Look at temperature charts and gather recent reports in order to make your run out there productive. In general, the 100 fathom curve and around the canyons will be productive areas. 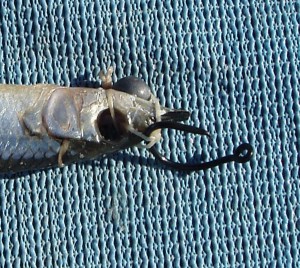 The classic white marlin bait is a small ballyhoo rigged with a small J-hook. It is time to circle. Research done by Dr. John Graves has shown that 35% of white marlin caught on J-hooks do not survive. Almost all of those caught with circle hooks survive the catch and release experience.