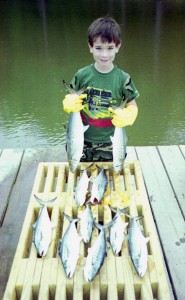 Spanish Mackerel: Spanish mackerel are in our area from June on into October. They can be caught throughout the lower Chesapeake Bay and in our ocean waters. Good areas in the bay include the waters around the CBBT, around York Spit Light, along the Baltimore Channel, around any wreck or reef, the 4A buoy, Cape Henry, and anywhere you see them free jumping. The bay waters are best June through September. There is usually a real good bite at Cape Henry from late August through mid-September. Later into the fall, you need to move into the ocean to target them. October is a good month to find them, in the Chesapeake Light Tower area, mixed in with king mackerel and false albacore.

June through August they can be found almost everywhere. In the ocean, look around any of the wrecks. Some good wrecks include the Santore, Tiger, Gulf Hustler, Anglo-African, Hanks, and Ricks. Look for them all along Virginia Beach. They can be found on out to the ocean seamounts like the Cigar and 26 Mile Hill. Some will be caught on the Fingers every year. 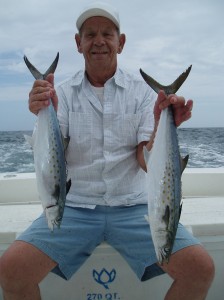 Spanish can be caught a variety of ways. I’ve caught them by casting spoons into my chum slick while cobia fishing. I’ve caught them on bottom rigs meant for croaker. I’ve also caught a couple on clam baits while fishing for spadefish. Jigging diamond jigs around the islands of the CBBT can be productive at times. The most consistent way to catch Spanish mackerel is to troll for them. Although they are excellent table fare, I am most interested in Spanish as marlin bait. Every June I take my kids out to the Back River Reef area and put them to work catching my supply for the year. We will troll 3 or 4 spoons, a couple off planers and one or two with an in-line sinker. When I first started fishing for Spanish I had read that you should use a very small spoon like a 00 Drone. I also read that they are very leader and tackle shy, you should always tie directly to the spoon, no snap swivel. The leader was supposed to be 50 feet long and no more than 20 lb test. This is what I used and I caught fish. That leader would shortly be a mess and it was real fun trying to hand line in 50 feet of 20 lb leader when a false albacore would get on. I tried using snap swivels and still caught fish. I went up to 50 lb test leader and still caught fish. I went up to a number 1 Drone spoon and caught more fish and then I cut my leader in half and still caught fish. Today, I use #1 Clark spoons with a red bead in front. The Clark spoon has a swivel built in so I tie directly to the spoon. I’ll use about 20 feet of 50 lb test mono as a leader. The other end of the leader is attached, with a snap swivel, to a planer or an in-line trolling sinker. Spanish don’t get very big, so you don’t need very heavy tackle for them. The planer, on the other hand, can generate some force. So for your planer rods, you will need tackle in the 30 lb class. You can go lighter with the rods using in-line sinkers. The spoons will be either silver or gold and you should try both. You can troll fairly fast when targeting Spanish mackerel. 5 to 7 knots is a good range. A general rule of thumb is if you are catching more bluefish than Spanish speed up until you are catching more Spanish than bluefish. Once you find the fish, keep trolling in the same area and it will not take long for you to catch your limit. 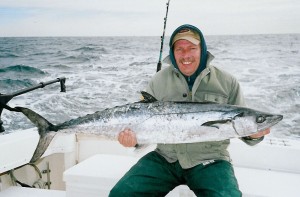 King Mackerel: King mackerel are in our area from June through October. They can be found in the ocean waters right up next to the beach on out to the canyons. The Chesapeake Light Tower area and nearby wrecks can be loaded with kings in the September through October period. Earlier in the season, there are times they can almost be pests to anglers targeting tuna on the Fingers, 26 Mile Hill, and the Cigar. King Mackerel can also be caught several different ways. Trolling with tuna lures and ballyhoo accounts for a good number of Kings. In the fall, many are caught by jigging spoons around the legs of the Chesapeake Light Tower. Anglers targeting large, smoker kings will slow troll live bait such as menhaden. Again, the most consistent way to catch king mackerel in our area is to troll spoons. They can be rigged the same as the ones used for Spanish mackerel, just use larger spoons. The 3 ½ Drone is the standard. Number 3 and number 4 Drones also work. The Drone spoon will twist your leader. You can help fight this by putting a swivel half way down your leader. I tie the leader directly to the ring on the spoon. When I’m offshore and trolling a spoon I’m trying to catch kings, wahoo, and tuna so I will increase the leader strength to at least 100 lb test mono. Around the Chesapeake Light Tower area I’ll use about 60 lb test mono for leader material. On the inshore grounds, you will pick up Spanish mackerel and false albacore as well as king mackerel trolling 3 ½ Drones. Offshore, everything will hit a spoon. Drone spoons come in a variety of colors, try different ones until you find the hot color. When using a planer, its size will depend on how deep you want to go and the size of the spoon you are using. #1 planers can be used with small spoons when targeting Spanish, while a #2 or 3 will need to be used with the larger spoons.

Atlantic Mackerel: Atlantic mackerel, also known as Boston mackerel, are in our area from mid-February through mid-April. They give us something to catch when there is not a lot going on. Cape Henry can be a good area. The waters in the Chesapeake Light Tower area are usually good. The trick to these fish is finding them. Watch your fish finder, listen to your radio, and watch for the head boats out of Rudee that will target these fish some, this time of year. To catch them, position your boat over the school and vertically jig a mackerel rig through them. A mackerel rig consists of several small tube lures attached at about 1 foot intervals to a main leader. At the bottom of the leader is a place for a weight. A diamond jig can be used in place of the weight and give you a chance at another fish. These rigs can be bought at our local tackle stores, order through a catalog, or you can make your own. The tube lures come in a variety of colors.

Frigate Mackerel: Frigate mackerel are also known as frigate tuna and they look more like a tuna than a mackerel. Ken Schultz’s Fishing Encyclopedia says that these fish are found throughout warm waters but that there are few documented occurrences in the Atlantic Ocean. I include them here because of a wedding anniversary that I missed. We fished down the Cigar way and had a very slow day offshore. We quit early to get me home so I could go out with my wife and celebrate our anniversary. On the way in my outdrive self-destructed. We were stuck in forward and could only make 5 kts. My wife went out without me. We put out some spoons and trolled from the Hanks to the Tiger Wreck until it got dark. We caught Spanish mackerel throughout that whole stretch. We also caught six small tuna, about 10 inches long. The previous year, I had collected some tissue samples from some small bluefin tuna for Dr. John Graves of VIMS. Hoping that I would catch more, he had gotten me a permit to keep undersized bluefin for his research. Thinking they were baby bluefin, we kept them. When Dr. Graves came and got them, he said because of the wavy lines on their back, they were not bluefin but he didn’t know what they were. He did a DNA analysis and found that they were frigate mackerel. So frigate mackerel are a mackerel that can be caught in our waters.

Cero Mackerel: Cero mackerel can be caught in our ocean waters in the same areas you catch king and Spanish mackerel. I know nothing about these fish other than they look a lot like a Spanish mackerel in pictures. Bill Hall, one of the best fishermen in the state, assured me I would be able to tell the difference if I ever catch one. The spots on the cero are arranged in lines, not scattered like a Spanish. Also, the spots themselves are elongated into short lines, not round like those of a Spanish. They can be caught the same way you catch Spanish mackerel. 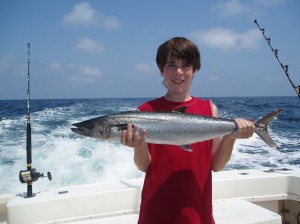 This leads us to a more common identification problem. Spanish mackerel have spots but so do immature king mackerel. We need to be able to tell them apart to know whether we just caught a citation Spanish or a small king. We also need to be able to tell them apart so we can obey the fishing regulations for each species. When I’ve caught both, around the same size, there is no problem telling which is the Spanish. It is much brighter. Even after they have faded in the cooler, the Spanish is still much brighter. The lateral line is also supposed to be an indicator. It takes a steep plunge in the king under the 2nd dorsal fin. This hasn’t worked well for me. What has, is the front part of the 1st dorsal fin of a Spanish has a black area that is missing on a king.