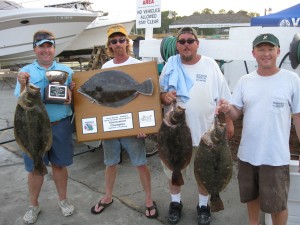 Five hundred of the finest flounder fishermen gather each summer to compete in the Flounder Bowl. In order to be crowned champion, the winning team must put together the heaviest 3-fish stringer of doormat flounder. A single large fish could just be a “fluke”. Determining the winning team by the total stringer weight means that the flounder anglers that consistently catch large fish are most likely to win the Flounder Bowl trophy. 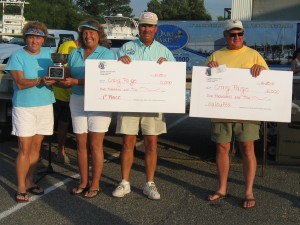 What do you need to do to get on the leader board this year?

Fish where the big fish are 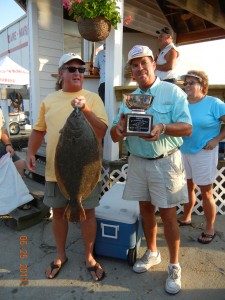 Big flounder can pop up almost anywhere in our area. Doormats can be caught up on the flats, inside the inlets and everywhere else but there are areas that consistently produce numbers of large flounder each summer. These are the places that you need to be fishing. The Chesapeake Bay Bridge Tunnel (CBBT) is a prime location and this is where many of the top flounder are caught each year. The areas around all four of the rock islands, the curve near the 3rd island, and the pilings from the 4th island to the high rise are the best big fish producers. Other hard structures are also regular big flounder producers. The best of these are the Cape Henry Wreck, Back River Reef, and the Cell. Doormats are caught at each of these locations every summer and during the Flounder Bowl each year. Two more summertime, big flounder areas are channel edges rather than hard structures. The buoy 36A area, off of the city of Cape Charles, and near buoy 42, up the bay from the Cell, are both big flounder locations. 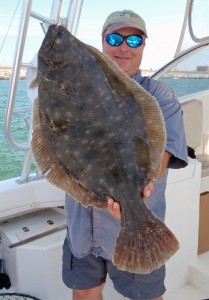 Tournament flounder fishing is a bit different than your normal flounder fishing day. During a tournament, the goal is not to catch a limit of “keeper” flounder for a big fish fry. The goal is to catch the largest fish. If you only catch three fish all day, that is fine as long as they are big. Some techniques may make it less likely that you will catch a lot of fish but may give you a better chance of catching a large flounder. 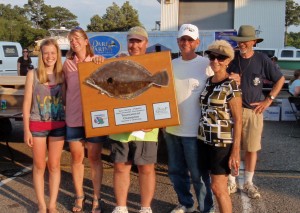 Flounder have large mouths and a big flounder can eat a rather impressive bait. While you can catch a large flounder on a small bait, a big bait is more likely to attract the attention of a big fish looking for a meal. When fishing with live bait, rather than minnows consider using spot, croaker and mullet. Strip baits are great for flounder. Use larger strips to target larger flounder. 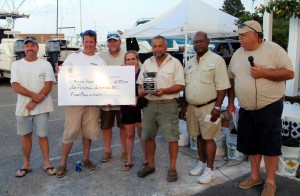 Live baits are great for fishing around hard structure. Use the boat engine to try and hold the boat next to the structure and keep your bait in a prime ambush location for a big flounder. The bottom rig is a three-way swivel with a short drop to your sinker. The leader to your hook does not need to be very long, 18 to 24 inches. For live baits, I prefer a plain, undressed hook. Another technique is to anchor on the structure and to use the current to work your baits in ambush points next to the structure. 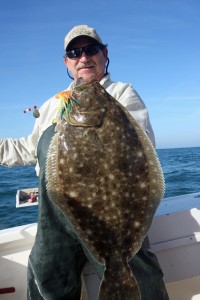 Large strip baits can also be very effective when worked around hard structures. The strips can be made from most any fish or the newer artificial, edible baits can be used. One technique is to use the strip on a jig and vertically work the edges of the structure. A deadly technique that does not seem to be used as much anymore is to wire-line troll the edges of the structure with large strip baits. Strip baits are commonly used at the channel edge areas of 36A and 42. At these areas, you can drift large strip baits on hooks dressed with various attractors. When the current isn’t right for a good drift, using the boat engine to power-drift or to troll will allow you to work your baits over the area. 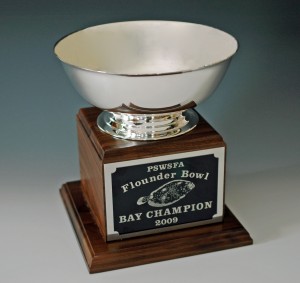 Target big flounder in the prime big flounder areas and this year, you may be the one walking away with the trophy. 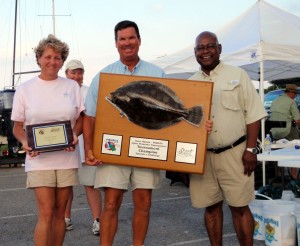