To Catch a Sail

To Catch A Sail

There is nothing else like it. The high dorsal fin, the sail, makes the sailfish the easiest of the billfish to identify. Well, the swordfish is also rather distinct but it is in an entirely different family than the “Istiophoridae” family which 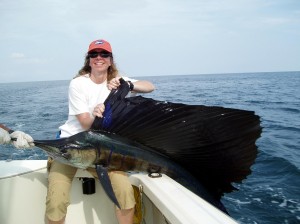 includes the marlins, spearfish, and sailfish. Compared to its cousins, the sailfish is relatively abundant. It is found world-wide in tropical and temperate seas. Like the other billfish, commercial mortality is the major risk to the health of the species and it is considered a food fish over most of its range. That attitude is changing. Here, on the East Coast, almost all sailfish are released and this practice has become much more common in the sailfish hot spots of Central and South America. 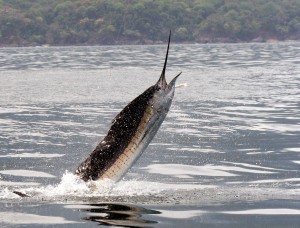 Sailfish can be caught well offshore but compared to the other billfish, the sailfish is much more of a coastal species. In fact, they can be found close enough to shore that on occasion, they have been caught from the fishing piers of the Outer Banks of North Carolina. Good numbers, not too far from shore, and tremendous acrobatic displays once hooked make the sailfish a very popular sport fish.

Here in the mid-Atlantic, sailfish are available from May through September. Most are caught as an incidental catch during our mixed-bag offshore trolling season though some anglers will target them out of the Carolinas. North of the Carolinas, the billfish we tend to target the most is the white marlin and sailfish are caught during that fishery.

While sailfish can be caught on a marlin plug or on a pin-rigged ballyhoo behind a Sea Witch, there are better ways 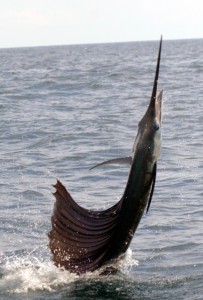 to target them. I have been fortunate to fish for sailfish in the mid-Atlantic, Florida, South America, and Central America on both the Pacific and Atlantic sides and have fished for them using a number of different techniques. Fishing with live bait while drifting or slow trolling, with or without the use of kites is very popular and it is a very effective way of catching sailfish. This has become the way to fish for them in Florida. My favorite way to fish for sailfish is to troll rigged, natural baits. This may be because this is how I am used to fishing for marlin off of Virginia but nothing gets me more excited than seeing a lit-up billfish show up in the spread. 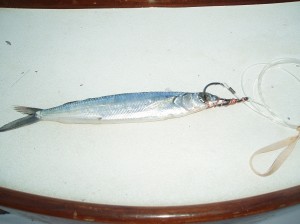 The most common bait is a small ballyhoo rigged naked. That is no skirt or lure in front of the bait. I have mostly switched to using circle hooks while targeting billfish due to release mortality studies done on white marlin by Dr. John Graves of the Virginia Institute of Marine Science. I say “mostly” because I still like to use a large J-hook in a horse ballyhoo or Spanish mackerel trolled behind an Ilander or Iland Lures Express for blue marlin. I may have to change my thinking on this also depending on the results of a blue marlin release mortality study which is being done now. We will rig our small ballyhoo to swim or as a skip bait. Sailfish like both. Besides small ballyhoo, the other bait we pull for sailfish is the Panama strip. The Panama strip is a bait made from the belly of a bonito or false albacore. You can go to your local tackle shop and buy a pack of ballyhoo. You have to catch your own belly strip. An 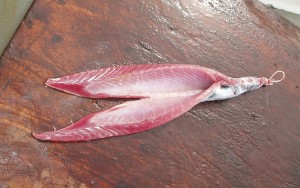 advantage of the belly strip over ballyhoo is that if you miss the sailfish on the first bite (something that I have been known to do) you will still have your bait on the hook and may get another chance or two. Often with ballyhoo, you only get one chance and if you miss it all you will bring back is a ballyhoo head. So if you catch a bonito out there, you may want sew yourself a Panama strip and give it a try. 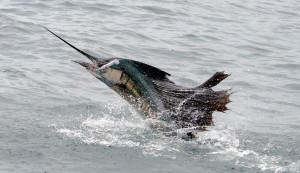 When we are mixed-bag fishing, it seems the more the merrier. We will pull all kinds of stuff for tuna. We may put a bait down for wahoo. A variety a baits for a variety of fish. When you target sailfish, keep it simple. Leave the 50s and 80s in the cabin and break out your light trolling gear. We only pull four baits, one from each outrigger and two flat lines in close. I tend to prefer the swimming ballyhoo on the flat lines and skipping baits off of the riggers. That is all you need. Keep all of the baits fairly close to the boat where you will be able to see a sailfish that is  coming in to eat. 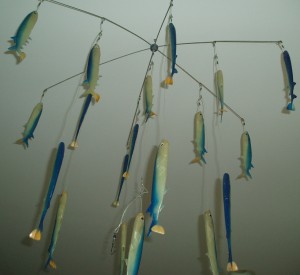 In addition to our hook baits, we will pull teasers to help bring the fish into our spread. We will pull a teaser off of each outrigger. These are usually daisy chains of the Moldcraft squid but anything that splashes around on the surface will work. We will also pull a dredge, sometimes two if we are tournament fishing with a full crew. Dredges can be rigged with natural ballyhoo or mullet, with artificial baits, or with mylar strips with pictures of fish on them. Regardless how you rig them, they all do the same thing, mimic a school of fish which sailfish want to eat. Many boats will pull their dredge from a down rigger. We just tie ours off to a cleat and handline it in. 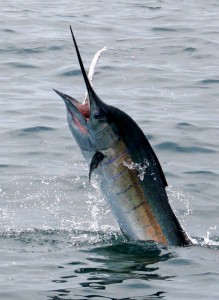 You can have an extra rod rigged with a bait, a pitch bait, to use if a sailfish appears behind one of your teasers. Usually, it is quicker to just grab the closest flat line rod and use that bait to pick the fish off of the teaser. Still, if you have enough anglers, it is good to have an extra rod ready. Sailfish feed in packs and it is not unusual to have multiple fish in the spread. Having an extra rod ready can mean another fish hooked up. If you are in an area where a blue marlin might show up in your sailfish spread, it is a good idea to have a heavier rod rigged up as a pitch bait so that you can feed him a bait on tackle more suitable for a larger fish.

Even though there is just one species of sailfish, the International Game Fish Association maintains separate records for the Atlantic and Pacific Oceans.

What’s in a name?

Scientists group closely related species in the same genus. They look at things like fins, scale shapes, gill rakers and 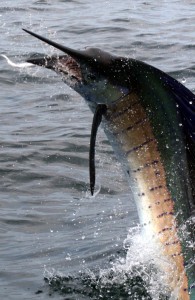 so on. More recently, researchers, like Dr. John Graves of the Virginia Institute of Marine Science, have been looking at the molecular genetics, the DNA, of fish. What they have found is that some fish which were considered separate species are really the same species. The sailfish is an example of this. The Pacific and Atlantic sailfish are no longer considered different species. The black marlin is no longer considered to be in the same genus as the blue marlin and a “new” billfish species has been discovered. The hatchet marlin is now known to be a distinct species but it is not that closely related to the white marlin which it resembles. Genetically, it is a spearfish and it will now be known as the roundscale spearfish.

The billfish grouped by genus:

1 Response to To Catch a Sail