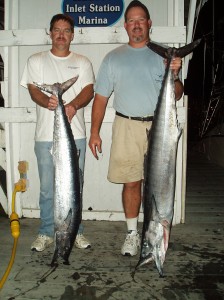 a lot of attention. Throughout it all, the wahoo is a very welcome bycatch. Wahoo arrive in our waters late in the spring and they will be caught all summer long. It is during the fall season when the wahoo bite really turns on. October and the first half of November is our prime time to target wahoo.

While most of our wahoo are caught on baits meant for tuna and dolphin, there are some things we can do to increase our catches of these toothy and very tasty critters. Wahoo are very fast and they have very sharp teeth. They will come in fast on their prey and slash off its motor (its tail). Then it will turn and eat what is left. 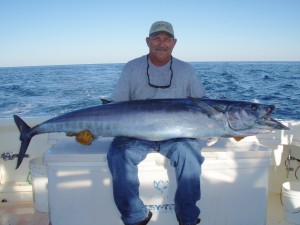 Because of their speed and teeth, the classic way to fish for wahoo is to fast-troll lures rigged on wire leaders. Any plug that will run at eight or more knots can be used to catch wahoo. Spoons, like the 3 ½ Drone, trolled behind a planer have caught many wahoo. Lures like the Ilander are wahoo favorites. You can pull a total wahoo spread or you can just add some of these to your tuna spread. In that case, your trolling speed will be determined by your slowest swimming bait.

Wahoo can be found anywhere. They do tend to congregate around structure. You will find them over wrecks, around towers, and like dolphin, they will be around lobsterpot balls, 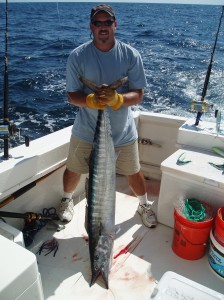 floating lumber, and around weed lines. Look for them a bit more shallow than you would target billfish. A lot of our wahoo are found in 20 to 50 fathoms of water. During the fall, temperature charts are especially useful. Hard temperature changes inside the 100-fathom curve will hold wahoo (plus tuna and dolphin).  The Fingers on out to the Norfolk Canyon is good wahoo territory. My best catches have been in the area of the Cigar.

Find some fishy water, put out a spread of your wahoo baits on wire, troll faster than you are used to and you will catch wahoo. We do it a bit different on my boat, the Healthy Grin. 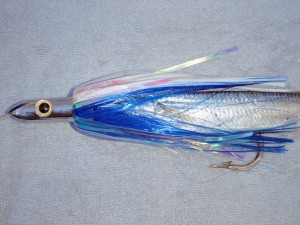 The first thing that we do wrong is that I do not use wire leaders. This is due to trips of trolling mixed spreads for tuna and wahoo. The wahoo baits would be on wire and the tuna baits would be rigged with monofilament leaders. Almost all of our wahoo bites would be on the monofilament. Even thick monofilament would get more bites than the wire. I just get more bites on the mono so that is what I use. You would expect that we lose a lot of baits but we don’t. It happens but it is a rare occurrence. We won the state in 2007 with a 96-pound wahoo that was caught on a lure John Bishop (Bishop Fishing Supply) gave me to try. Multiple wahoo, tuna, and marlin later, we are still pulling that thing on every trip. I guess I need to let John know that his bait is working pretty well. After writing this, I’m sure the next wahoo is going to bite it off. That is OK. I will take the occasional bite-off in exchange for more bites. Now having said this, I am probably the only idiot out there targeting wahoo without wire so take it for what it is worth.

I think that our lack of bite-offs has to do with the baits we use and how a wahoo attacks its prey. I will pull a 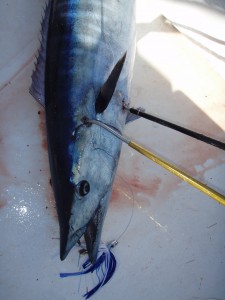 swimming plug sometimes but my most common wahoo bait is a large ballyhoo, rigged on a large hook, behind something like an Ilander, on 300-pound mono. Sometimes, we will rig the ballyhoo with double hooks but most often, it is a single, large hook. Wahoo attack the back of the bait so they usually find the hook before they find the leader.

Our typical spread when specifically fishing for wahoo, will consists of a planer pulled on a downrigger. The bait will be fed out a 100 feet or so behind the boat. A #64 rubber band will be attached to a snap, run twice around the fishing line and back to the snap. The snap is then attached to the downrigger cable. The reel on the fishing rod is put in free spool and water pressure pulls the snap down to the planer then the reel is put in gear. When a wahoo (or tuna) bites the 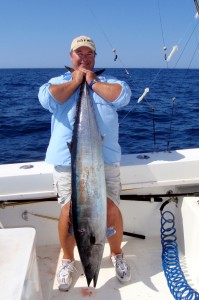 bait, the rubber band breaks and you are just attached to the wahoo. This bait will be a black/red or black/purple Ilander large ballyhoo combination. On the other corner of the boat is the same set up except we will have a spoon behind the planer. Again, just a mono leader tied directly to the spoon (in this case about 130 pound test). The rigger baits are all large ballyhoo/Ilander combination baits of various colors. Dark colors are the typical wahoo colors but we have caught them on all colors. Try different ones until you find the favorite for that day. The shotgun position can be another Ilander or something like a Green Machine.

The next thing that I do wrong is that I troll too slowly. I will troll faster than when I am targeting billfish but it is slower than classic wahoo speeds. We will average between 6 and 7 knots. The surface baits look good, the wahoo seem to like it, and 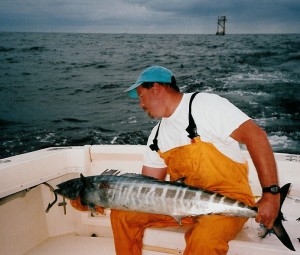 we are not trying to cover a lot of ground. On days when we catch multiple ‘hoos, we are working a ledge, weed line, rip or something that is holding the fish. Our day is spent making little circles in a productive area.

Watch your surface baits. If you see a swirl behind a bait and it looks like the fish missed it, it probably did not. Your ballyhoo now does not have a tail. The wahoo has turned back to finish its now helpless prey. A short, quick drop-back will often result in a hook up. 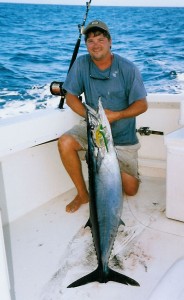 Many wahoo are lost just short of the gaff. Most wahoo will make an initial blazing run and then come fairly easily to the boat. Bigger fish will have more of an attitude and take a bit longer. You do not want to lift the fish’s head to gaff it. The angler needs to bring the fish to the boat, nice and steady. We use wind-on leaders so the gaff man does not touch the leader at all. The captain watches the fish and is ready to speed the boat up a bit if needed. We do not want the fish to get ahead of the angler. The gaff man calmly reaches the gaff over the fish and pulls the gaff back connecting with the fish right behind the head. Bring the fish into the boat and place it directly into the fish box. Stay away from those teeth! A little time on ice calms the fish down quickly. I am not a big fan of Billy bats. The bat seems to be more dangerous than the fish. 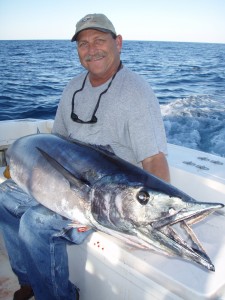