When Dr. John Graves, from the Virginia Institute of Marine Science, asked if I would like to help out with a study 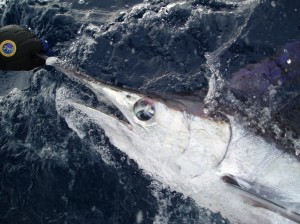 on white marlin, I asked what would I need to do? He said I would need to go marlin fishing. Well, that was a tough decision. He introduced me to his graduate student, Andrij Horodysky and marlin fishing we went. That was three years ago and what an education it has been.

Like most anglers fishing for white marlin, I was trolling small ballyhoo rigged with J-hooks. When a marlin hits the bait, the reel is put in free-spool allowing for a drop-back while the marlin gets the bait in its mouth. When it works correctly, the reel is put in gear and the marlin is hooked in the mouth somewhere. Sometimes, the hook is much deeper in the fish and other times the fish is hooked somewhere outside of the mouth, foul hooked. It is not unusual with white marlin to miss the fish entirely.

Part of the study involves placing pop-up satellite tags in fish caught and released by recreational fisherman (that is where myself and a number of other volunteers came in). These tags can be programed to pop off after months to 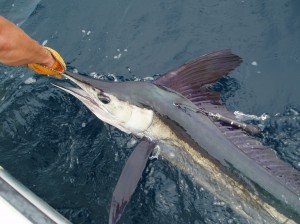 follow long term migrations but for this study, they are programed to pop off after ten days. We want to know if these fish survive the catch and release process.

The good news is that most of the white marlin caught and released with J-hooks will survive. The bad news is that 35% of them will die. I had no idea that the release mortality would be that high. In addition to the tags placed in white marlin caught with J-hooks, an equal number were placed in marlin caught with circle hooks. The survival rate for those fish was a bit higher. One hundred percent of the fish caught on circle hooks survived the catch and release experience. That is quite a difference, enough so that NOAA Fisheries would like anglers fishing for white marlin to switch to using non-offset circle hooks. 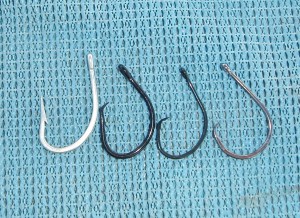 styles of hooks. Some of these fish were caught along the mid-Atlantic but to catch a lot of white marlin, you go to Venezuela. I was invited to go along on these trips on the condition that I learn how to catch marlin using circle hooks. I had fished with circle hooks while live-baiting for striped bass, cobia, and amberjacks. I had also used them while chunking for tuna but I had never trolled while using them.

It took a little practice not to set the hook like you do with a J-hook but while fishing in Venezuela I received instructions from a couple of great captains, Jimmy Grant and Bubba Carter. I also was able to fish with Dr. Guy Harvey who is a very accomplished billfish angler. With instructors like 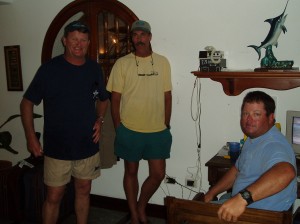 these, it did not take long to get the hang of it. It is hard to measure hook-up rates in a scientific manner. What is a bite and what is a touch? After fishing in Venezuela and using them this past summer off of Virginia, I believe that my hook-up rates with circle hooks are better than I ever achieved with J-hooks. Of course, with all of the instruction and opportunities to hook fish that I have had in Venezuela, it may be that I would be better with J-hooks now also.

We looked at three styles of circle hooks: the classic circle, a circle with an offset, and a circle hook that is shaped like a J-hook with just the point turned in towards the shank. These studies are still going on and I am looking forward to our next expedition to Venezuela. I can give some early observations however. It does not matter which style of circle hook that you use as to hook placement. They all 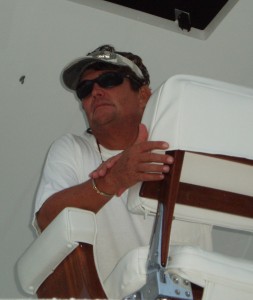 hook-up in the corner of the jaw almost every time. When they don’t, they are hooked in the roof of the mouth at the base of the bill. This is different than what I have seen with jacks, tuna, striped bass, and cobia. With these fish, most of the hook-ups with circles are in the corner of the jaw but I still get a fair number of gut-hooked fish. With marlin, I have yet to see a fish gut-hooked with a circle hook while trolling though I suspect that it happens sometimes.

There may be a problem with offset circles, however. In addition to looking at fish survivability and hook placement, Dr. Graves is also looking at hook retention. White marlin are notorious for “jumping off” after hook-up. Anglers want to hook the fish and they would like them to stay hooked until they are ready to let them go. It is generally thought that circle hooks will do a better job of holding onto a fish once it is hooked. Again, this is an ongoing study but during our last trip to Venezuela we noted numerous lost fish on the offset circle and none on the other types of circle hooks. I used the offset circle off of Virginia this past summer and hooked six white marlin with them. We caught all six and all six were hooked in the corner of the mouth. I just tied my leader material to the eye of the hook. In Venezuela, we crimped the leader to the hook after the leader was run through the eye, around the shank and back out the eye. This is done to improve the rotation of the circle hook. This worked great with non-offset circles but it did not seem to work as well with the offset circle. We pulled off a lot of fish after hook-up. We defined a hooked fish as one being on for at least thirty seconds and we timed it. If a fish was pulling drag and jumping for twenty seconds, it did not count. These fish can run and jump sometimes while just holding on to the bait. We thought by thirty seconds, almost all of the fish would actually be hooked. The fish we caught on the offset circles were hooked in the corner of the jaw like they are supposed to be but a couple of these fish were bleeding out of their gills. It is possible that these offset circles are catching deeper in the fish and then pulling. Some may reset in the corner of the jaw (our bleeding fish) and some just pull on out (our lost fish). 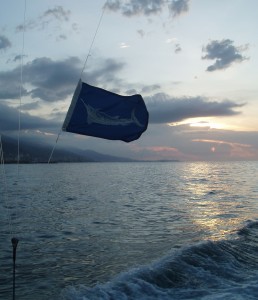 These studies are still on going. It will be interesting to see if there is a higher mortality rate with the offset circle hooks. Hook placement, hook retention, and fish survival will continue to be looked at with J-hooks and the different styles of circle hooks. With what I have seen so far, if you want your released white marlin to have the best chance of survival, you should be using circle hooks whether or not NOAA requires us to use them. We may just have had a bad couple of days with the offset circle hooks or maybe they will work better being attached to the leader in a different manner but until that is shown, I would choose to use a non-offset circle hook while white marlin fishing.

Now the downside, there is always a downside. Circle hooks work great while fishing exclusively for white marlin with naked ballyhoo. Circle hooks work great while chunking for tuna. They do not work well while trolling ballyhoo with lures in front of them for mixed-bag fishing like we do a lot of here in the mid-Atlantic. If you are primarily trolling for tuna and dolphin with the occasional wahoo or billfish bite, you probably want to leave the circle hooks in the boat. A possibility would be to have a circle hook rigged ballyhoo standing by as a pitch bait. When Mr. White Marlin shows up, feed him a circle.