White marlin are caught many different ways. They have been caught on spreader bars, Green Machines behind a bird, horse ballyhoo-Ilander combinations, and many a white has been caught on a pin-rigged ballyhoo behind a Sea 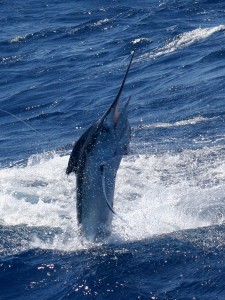 Witch. They will even occasionally be caught while chunking for tuna. These catches are a pleasant surprise but when you want to target white marlin you need to change things up a bit. Here are ten tips which will help you catch more white marlin.

White marlin can be caught on a variety of baits and lures. To increase your chances of hooking up, skip all of that stuff and stick with naked ballyhoo. The idea is to have a bait which the fish will want to eat and be easily processed (that means grab it and swallow it down). This also means that you should 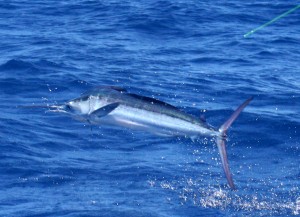 use ballyhoo on the smaller size. Rig your ballyhoo pinless. We are trying to present a bait which has as little as possible to get in the way of the fish swallowing it. That pin sticking up may hang up in just the wrong spot. You can rig your ballyhoo to skip or to swim. Both presentations work and having both in the spread is good. It has been my experience that the skipping ballyhoo will draw a lot of attention where the swimming ballyhoo just gets eaten.

There are times when putting out as many baits as you can into your trolling spread is a good thing. When targeting white marlin, less is more. Forget your 7,8,9, or 10 bait spreads. Pull 4 baits, one off of each rigger and two flat lines. When a fish comes in, it does not have too many baits to choose from and you will have a much better idea which bait it is going to eat.

What your trolling spread lacks without all of the fancy lures can be compensated for by pulling teasers. Pull a 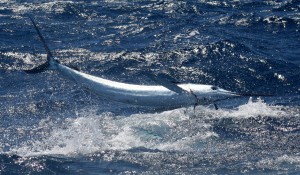 hookless teaser off of each outrigger in close to the boat. You can pull anything you want, something to attract attention. A classic white marlin teaser is a squid daisy chain followed by a large ballyhoo-Ilander combination. When the fish comes up to eat your teaser, take it away from him and feed him your naked ballyhoo bait. A fish all lit-up by that teaser is ready to pounce on any little fish which gets in its way.

The dredge is another type of teaser you really need to be using when you are targeting white marlin. Instead of working on the surface like most teasers, the dredge is designed to be pulled down under the water, out of all of the surface turbulence. The dredge mimics a bait ball, a tightly-packed school of bait fish. Dredges are made in a number of ways. They can be made with holographic strips, various artificial rubber fish, or with natural ballyhoo or mullet. You can mix them up using some natural baits and some artificial. They all look like a bait ball and they all work. Each boat will have its favorite dredge. You have to put enough weight in front of the dredge to keep it down in the water while you are trolling. You can pull your dredge from a down-rigger or you can just tie it off to a stern cleat. You need a dredge in the water and if you want, you can pull two. One from each side of the boat.

This does not refer to you fighting the fish but keeping a tight line then is a good idea too. This is referring to your spread. Forget the way, way back stuff when targeting white marlin. Your boat is your biggest teaser, you have a teaser running off of each rigger close to the boat and you have a dredge or two under the water, just behind your boat. The action is here. Keep your baits in close where you can easily see them. 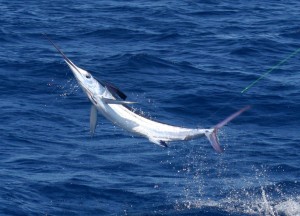 This is not a fishery where you can be in a half-doze while you wait for a drag to start screaming. I have no idea how many white marlin have not been caught when a fish comes up and hits the bait and nobody notices. You need to be watching the baits and teasers so stay awake! The idea is to beat the fish to the rod. If you see a fish come up behind your right rigger bait, you want to have that rod in your hand before the fish touches the bait. Your chances for a hookup are much higher if you already have the rod in your hand when the fish bites. If he beats you to the rod, you are playing catchup.

When the fish tries to eat the bait, feed him or “drop back”. A good drop back is a little tricky to develop. You want that bait to fall back as naturally as possible. The fish should feel no tension at all. I don’t think that a little tension actually bothers the marlin but it just makes it little more difficult for it to process the bait. Instead of it swallowing the bait and you achieving a hookup, the fish holds the bait sideways and you end up bringing back a ballyhoo head. Clickers need to be off and get your thumb off of the spool. Let the line fall from your rod tip into the water. The drop back does not need to be long but it does need to be smooth and free. With these small, naked baits, a drop back of five seconds in plenty. If you miss the fish, get your rod tip up and crank the bait back up to the surface. If you still have a ballyhoo, hold it there and be ready to drop back again. If you just have a ballyhoo head, crank it on in and get that bait out of the water.

White marlin fishing is not the time to be using your 50s and 80s. Put them away and break out 20s and 30s. Light tackle will handle white marlin fine and the fish are more fun to catch on lighter tackle but this is not why you 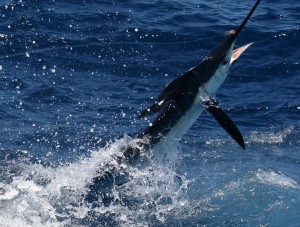 should be using the light stuff. It is just easier to catch them with light tackle. It is much easier to handle the light stuff and you can achieve a smoother, more free drop back with 20s and 30s than you can with bigger reels. Downsize your leader also. Think about 100 pound-test leader material for whites. Some captains will go down to 80 pound test. It is not that marlin are leader shy. The lighter leader allows your small baits to swim better but again it goes back to allowing the marlin to process your bait. It is easier for it to move the bait around to swallow with a lighter leader.

You hook up a marlin on that little reel and the drag is screaming. You will want to clear everything and go after your fish: not so fast. There is more line on that reel than you think. White marlin tend to travel in groups. If you have hooked one, there are others around, keep trolling. The captain can help by making a turn towards whichever side your hooked fish is on. The angler moves to that side of the boat and keeps his line tight as the captain turns back towards the fish. The angler can move to the side of the boat because when fishing for white marlin, we are fishing stand-up. The fighting chair is something for you to put stuff on. While everyone is watching that white marlin jump, two more have come into your spread and nobody notices until a line pops out of a clip. It is hard to do, but the other anglers need to ignore the jumping fish and watch the other baits and teasers. When a white first comes in on a bait, an angler gets to the rod and everyone else watches to see if he is going to hook up. Everyone else needs to be looking at everything except that one bait. If you don’t raise another marlin during your turn, go ahead and clear the other lines and go get your fish.

Here in the mid-Atlantic, white marlin are available May through October. Our prime time, when fishing is white hot, is August through September. White marlin can pop up anywhere but during this prime time they tend to group up out in the deep. You can think of your run to your favorite yellowfin tuna areas and add another 20 miles to it. There are years when a lot of white marlin will be caught in 30 fathoms but more often the fish will be schooled up out in 500 to 1000 fathoms. To catch a lot of white marlin in the mid-Atlantic, you have to be willing to spend a 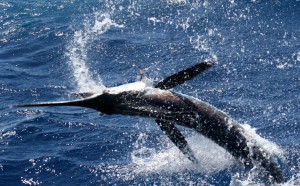 Learn to use Circle Hooks

This is a bit of a misnomer. These are not baits to cast, they are extra baits ready to be dropped back into your spread. Have two ready. One is just another naked ballyhoo white marlin set up. Having an extra rod ready can mean an extra fish when a pack of white marlin shows in your spread and you have enough anglers for one to drop back an extra bait. This rod can also be used to quickly replace that bait in the spread where you just missed that white marlin and he got your bait. He may still be there looking for another. Your second pitch bait rod is on heavier tackle and it can be a Spanish mackerel or big ballyhoo. This is for that big blue marlin which just showed up on your port teaser. He sure is rather impressive sitting there, waiting for you to feed him something. Get that pitch bait out!