Fishing on the Edge

Life on the Edge 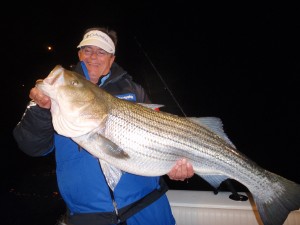 Precision was the name of the game on that bitter-cold December evening off Virginia Beach, Virginia. Dr. Ken Neill III and I were anchored up-current of a particular span along the Chesapeake Bay Bridge, drifting live eels back to the distinct shadow line created by its lights. We were seeking trophy striped bass lurking in those shadows, and I soon hooked into a brute. After a struggle to keep the fish from reaching the bridge structure and then playing it through a swift current, I finally led a fat bass into Neill’s net. It scaled 36 pounds. Within an hour, Neill caught one pushing 50 pounds.

He adeptly positioned as many as six baits on and around that shadow line, from the surface to the bottom. Our bases were certainly covered, and the results reflected it. That distinct shadow line paralleling the bridge provided the perfect ambush zone for these bass, where they’d lie in wait for the forage fish attracted to the lights and those that were swept past with the tide. For us to have a shot at a bass, the baits had to be precisely fished along the edge of that shadow line. If a bait was several feet removed, it went unnoticed. This served as a prime example of a perfect edge, a zone that fish have come to depend on in their nocturnal feeding, and where anglers can catch monster bass near Virginia Beach.

Edges come in many forms, ranging from hard ones, such as inlet shelves, seawalls, abrupt bottom ledges and large wrecks with high relief, to “soft” ones, such as shadow lines from bridge and dock lights, rips, tide lines and offshore surface-temperature breaks. The more productive ones have two things in common: They are transitional zones, where well-defined opposing conditions accumulate bait and ultimately game fish, and they will all produce fish under specific conditions — it’s up to anglers to decipher the best conditions (tide direction and stage, wind or current direction) and times to be at their respective edges. Anglers adept at locating and reading them are always in a better position to score over those who aren’t. This was evident that evening off Virginia Beach, where Neill and I scored three bass.

What makes an edge productive is simple. Consider the shadow-line scenario: At night, baitfish are attracted to the glare from these lights, as are predator fish. However, if predator fish remained visible in the lighted portion of the water, most forage fish would be aware of their presence and keep safely away. This would make for an inefficient feeding situation for the predator fish. Instead, they’ll take up stations on the dark side of the shadow line, where they’re not visible to their prey, and ambush them.

Exactly where these stations exist depends on a multitude of factors. They can be directly in front of or behind a piling that breaks current flow; they can be alongside a piling, even better hidden from the forage fish; facing into the tide and several feet into the dark side; or holding behind a boulder, rock or other bottom obstruction underneath a bridge and deep within the darkness. Regardless of the exact station, predator fish will remain on the dark side of the shadow line. Then, when forage accumulates along that edge — where the light meets the dark — the predator races from its ambush spot and scores an easy meal. After the predator fish retreats into the darkness and more forage accumulates along that edge a bit later, the scenario repeats itself.

Other prime night zones with well-defined and fish-rich edges include lighted docks and seawalls, where illumination spills onto the water and creates distinct shadow lines. Dock lights that are regularly left on establish feeding stations around them, as opposed to unlit or occasionally illuminated docks.

Forage is drawn to these lights, and game fish instinctively take their stations along the perimeters of the shadows. Try pitching a bait up-current along these edges and letting it drift back several feet into the shadows, just as a natural baitfish, shrimp or crab would be transported by the tide. Ditto with a topwater plug or lure. Or, if the tide is running directly back to the dock or seawall, anchor, power-drift or use a trolling motor to hold up-current of the structure and drift a bait back. Bucktailing and soaking natural and live baits along the bottom near these shadow lines also pay off. Play off the edges. 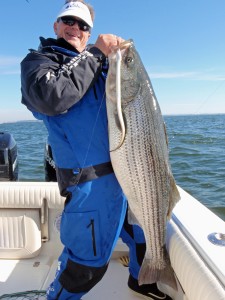 The edge strategy is not exclusive to nighttime. During my Virginia Beach striped bass trip, Neill and I spent a day drifting a spread of as many as nine eels through Chesapeake Bay’s North Channel, known locally as the Deepwater Slough. This channel averages around 80 feet deep, though it drops to more than 100 feet in some areas. The flats on either side are 35 to 40 feet deep. Therefore, it’s a natural highway and feeding center for big winter-run striped bass seeking forage carried off its shelves and into the channel with the tide. In the channel, both forage and bait tend to follow the sharp edges of the ledges and lurk about prominent bottom deviations. Drifts within this channel — our eel baits staggered from just a few feet beneath the surface down to just off the bottom — yielded three big bass for us, including my personal best of 39 pounds. This is no different from working deep inlets, passes or other channels; find the edges and get your baits into that zone, and you’ll score fish.

During a brisk day this past November, I took a New Jersey friend fishing off Haulover Inlet, in North Miami Beach. My goal was to provide this Northern visitor with a sampling of our Southern fishing, and I planned to anchor and live-chum for Spanish mackerel. However, I decided to look offshore first. We came upon a beautiful rip in 300 feet of water, with a well-defined sharp edge created by dirty green inshore water meeting the cobalt Gulf Stream. Sargassum weed was trapped along that well-defined edge, and birds scoured the area. You just knew dolphin had to be close by. Within minutes of our putting out live pilchard baits and tossing in some for chum, the dolphin found us. Again, it was a perfect edge, where contrasting current velocities and water clarities gathered weeds and baitfish, which in turn established ambush zones for larger game fish like those dolphin.

“These edges are relatively strong water-density features in the ocean that are the boundaries of the water masses,” says Roffer. “These physically pull and concentrate baitfish. After a few days, when there are persistent concentrations of bait, the larger fish become concentrated in these zones. The edges with the best potential are the ones with concentrations of seaweed and other floating objects like wood and trash that have baitfish associated with them. Not all edges will have a concentration of baitfish, which is usually related to the persistence, maturity and flow direction of the materials that form them.”

Like the ones in the inshore bridge- and dock-shadow scenarios, Roffer acknowledges, these edges also have different sound properties which likely influence the predator-prey relationships to the benefit of the predators. The sounds associated with these edges are likely to mask the predators’ sounds on one side, acting like a sound curtain for them to hide behind, enabling efficient ambushes.

“The best part of an eddy is where the water is pushing into the ledges, which forces the fish out of hiding in the bottom structure,” says Roffer. “When forced away from the bottom structure, the fish are more vulnerable to the larger predators, which then concentrate in these areas and start a feeding frenzy. Depending on the circulation associated with the eddy, additional good fishing action occurs in the center, where the prey and larger fish are forced closer to the surface by the upwelling and cooler water, much as with the relatively smaller western-boundary Gulf Stream eddies.”

The key is knowing how long these water-mass boundary features have been hanging over good bottom structure. This can be determined by studying sea-surface temperature charts and ocean-color satellite data, because the water masses have signature water temperatures and colors, enabling you to calculate how long a feature has been over a particular bottom structure.

As far as fishing these offshore edges goes, it’s often a matter of finding the stretch that is rich with bait and sea life. Birds are excellent indicators of a live edge and can be picked up on radar. So, when trolling or running-and-gunning down an edge, consult the radar, and also the fish finder, for any subsurface activity. Once in a bait-rich area, stick it out and work the spot thoroughly.

Sometimes locating fish is a matter of trolling tight patterns along the break or trolling up to a half-mile or so deep into the adjoining waters. Also, there are times when the fish are not at the surface along a rip or eddy and must be coaxed up. This is accomplished by trolling dredges and teasers to create more surface activity and using downriggers to place baits deep. Stopping to drop flutter jigs is also an effective method.

Edges come in many forms. Take into consideration the entire environment, create an image in your mind of what might be happening, and concentrate on where ambush zones may be. It’s a thinking angler’s game combined with some precise bait positioning. But in the end, rewards come big time in terms of game fish.