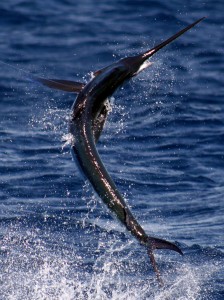 We are lucky enough to live in one of the premier marlin destinations in the world. We do have good blue marlin fishing here but it is the white marlin that is our claim to fame. Our white marlin bite is a seasonal fishery with our marlin season typically lasting from May through October. August is typically very good and September is awesome! Tropical storm systems, Gulf Stream eddies and bait concentrations will vary when and where the best of it will be, but you can count on excellent marlin fishing in the Mid-Atlantic during the months of August and September. 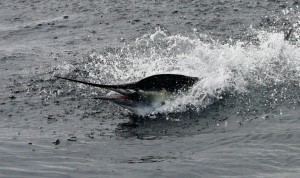 Look for the bite from the Washington Canyon down to the Norfolk Canyon and on down the line to off of Oregon Inlet. The Triple 0s area (41000 LORAN) is typically good. Fish will be found from 30 fathoms on out past the 1000 fathom curve. In general, the 100 fathom curve is a good place to start. The fish are going to be where the bait is. 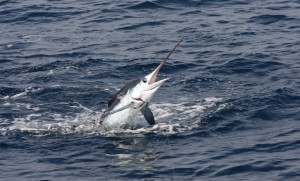 Fishing for white marlin can be very challenging and very simple. You do not need a lot of heavy tackle and fancy rigs when fishing for white marlin. Twenty to thirty pound class tackle is typically used. The bait of choice is a small, naked ballyhoo. Leaders are light, 80-100 pound test, to not interfere with the action of the ballyhoo. 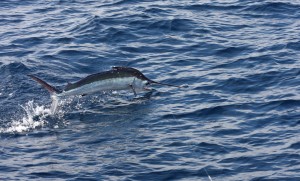 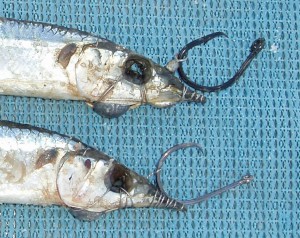 When targeting white marlin, most anglers will rig their ballyhoo on a circle hooks. Research done by Dr. John Graves’ lab at the Virginia Institute of Marine Science showed nearly 100% survival of released white marlin caught on circle hooks. Using the same “drop-back” fishing technique with J-hooks resulted in about 35% post release mortality. This study led directly to regulation changes requiring the use of circle hooks in marlin tournaments and most of the better marlin fishermen have switched to circle hooks when white marlin fishing even when not fishing a tournament. 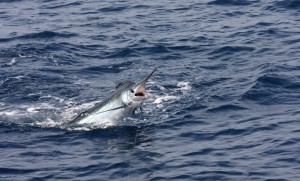 Pull a naked ballyhoo off of each rigger and a couple in the flat-line positions and you are good to go. It does not get much simpler than that. Most boats will add a couple of larger baits to their spread for a blue marlin to eat and these larger baits make very good white marlin teasers. 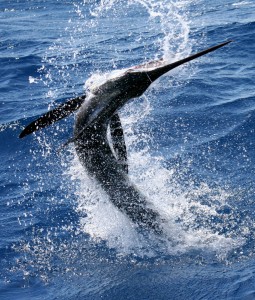 Teasers are an important part of white marlin fishing. A squid daisy chain pulled in close, off of each rigger, is almost universal. Pulling a dredge of some sort, mimicking a bait ball behind your boat, is an excellent way to draw marlin into your spread. In addition to your trolled ballyhoo, it is good to have a couple of other rods ready to go with ballyhoo rigged and hanging in a bucket of water. When you get a hot white on one of your teasers, pull the teaser away from it and feed it one of the pitch baits that you have ready. 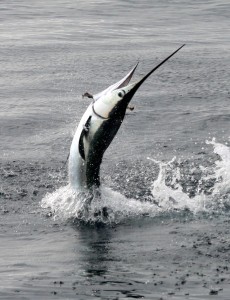 Trolling ballyhoo for white marlin is much more angler involved than trolling baits for tuna. Going into a semi-doze with a beer in your hand while waiting for a drag to start screaming is not going to work very well. Your chance of hooking the fish go way up if you see the fish prior to the bite. Beat the fish to the rod. With rod in your hand, you can drop the bait back as soon as you feel the marlin strike your bait. The drop-back does not need to be long but it does need to be smooth with no resistance. A heavy thumb will lower your hook-up percentage. With circle hooks, just engage the reel and let the line come tight and the circle hook do its job. There is no setting the hook required and attempting to do so will defeat the action of the circle hook. 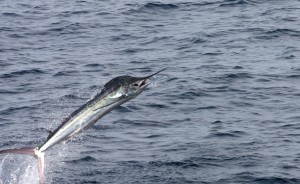 White marlin are not a schooling fish. They do however group up when feeding opportunities arise. This time of year, when you have a white marlin in your spread, it is probably not alone. When an angler is trying to hook a fish, the other anglers should be paying attention to your other baits. When you do hook up, do not be in a hurry to quit trolling. Put your boat into a wide turn towards the side the fish is on and see if you can get another bite or two. 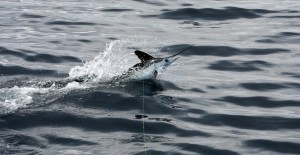 We think of white marlin as creatures of the surface layers of the ocean. That is where we catch them. Research done at VIMS shows that they do spend about half of their time in the top 33 feet of the water column. The rest of the time is spent making deep, presumably feeding dives. Some of these dives are in excess of 100 fathoms with the average dive in the mid-Atlantic being 21 fathoms. They dive deeper in the Caribbean where the water is warmer. White marlin spend about 85% of their time in water from 75 to 84 degrees so that gives you a temperature range to look for. 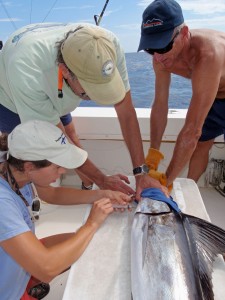 These animals are tremendous game fish putting on amazing aerial displays. They are hardy and handle the catch and release experience very well. With circle hooks, survival rates are almost 100 percent. Current research being done is looking at blood and muscle physiology compared with fight times. Longer fight times are correlating with measurable increases in stress as shown in the chemistry. Keeping your fight times short and using circle hooks will help insure that this tremendous fishery continues to delight and amaze.