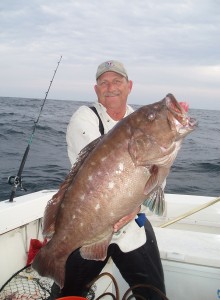 You fish for grouper off of Florida or maybe, the Carolinas. You do not fish for them off of Virginia… but maybe you should. In less than one year’s time, the snowy grouper world record has been broken three times off of Virginia’s coast. Virginia has grouper and they run large.

Until recently, this has been a little known fishery. The few captains, like David Wright and Joe DelCampo, who knew about this fishery kept it very quiet. Each of them has caught grouper and other offshore bottom fish like tilefish and blackbelly rosefish weighing more than the current world records but nobody knew about it. It wasn’t that they wanted the fish to themselves, they just cared more about the fishery than they did about records. The pattern has been for a new wreck or good bottom area to be found, a lot of big groupers are caught, and then the fishery is depressed. They did not want that to happen to Virginia’s fishery. These fish are managed by the regional councils. From North Carolina on south, grouper are tightly regulated to try to protect the remaining stock. We were not supposed to have grouper in Virginia so our fishery was entirely unregulated. It would not take long for directed commercial and recreational fisheries to greatly depress this almost untouched fishery.

Well, with all of the state and world records caught, the secret is out. Virginia has a special fishery and has taken 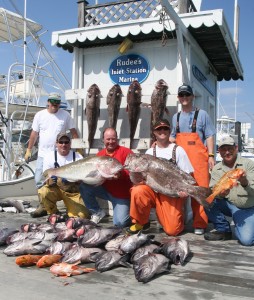 steps to keep it that way. Listening to the concerns of these captains and to a strong appeal by commercial fisherman, Harry Doernte among others, the Virginia Marine Resource Commission has enacted a one grouper per person recreational bag limit and a 175 pound per vessel commercial limit. Enacting strict regulations before the fishery becomes depressed should maintain Virginia’s world-class grouper fishery. These regulations apply to all species of grouper and the grouper-like wreckfish: Polyprion americanus.

To find Virginia’s grouper, look for broken, rocky bottom along edge of the continental shelf in fifty to one hundred fathoms of water. They are structure oriented fish and you will often find them stacked up along a ledge or drop off. The walls of the Norfolk Canyon are custom made for grouper and any wreck lying out past the fifty-fathom curve is a good place to try.

We are not using very heavy tackle. We are using braided line. Its thin diameter allows us to put a lot of line on 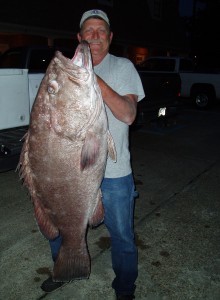 relatively small reels. The latest record snowy grouper, a 49 pound 9 ounce fish captured by Roger Burnley, was caught using a Penn 320. We also have had good luck with the Shimano Torium reels. Any quality reel in this size range can get the job done. Reels with larger handles and a higher rate of retrieval can make things easier on you.  Using 50-60 pound braided line and medium tackle, we have had good luck bringing 50-pound fish up from the depths. However, there have been fish which have proven to be too much for our tackle to handle and we have not been able to get them to come off of the bottom. There are some big creatures living out there.

Terminal tackle is simple. Your main line goes to a 3-way swivel. Off of one arm of the swivel is about 5 feet of 100-150 pound leader material which is tied to a 9/0 size hook. We will use both J-hooks and circle hooks. They both work fine. Off of the last arm of the swivel is 1-2 foot drop to your sinker. Use enough weight to hold bottom. Usually, we are using sinkers in the 20-28 ounce range. The best bait we have found is fresh cut fish. Bluefish works very well.

Drop your bait to the bottom and hold on. This year, the most common catch of the “grouper” group has been the 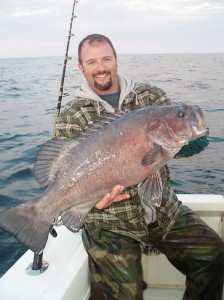 wreckfish. These fish have really shown up in numbers and nobody really knows from where. Of the true groupers, snowy grouper are your most likely catch followed by warsaw and yellowedge grouper. While fishing for grouper, you will also encounter sea bass, blueline tilefish, blackelly rosefish, golden tilefish and who knows what other surprises you may bring up from the deep. More than once, we have taken our catch to the Virginia Institute of Marine Science to find out what it was that we had caught.

With 70 mile runs to the fishing grounds and strict recreational and commercial limits, Virginia’s grouper fishery will mostly be a by-catch fishery, something to try on occasion while you are out there after something else. This should be good for the long-term health of the stock and it also means that if you do give it a try, you will have a chance at the next world record.

Telling them a part

Our first two snowy grouper records were caught on the same trip. We knew they were grouper but we were not sure if they were big snowy grouper or small warsaw grouper (warsaw grouper can reach 500 pounds). Small warsaw may have spots and the spots tend to fade away on large snowy. So how do you tell if that 60-pound grouper you just caught is the next world-record snowy or just a good-to-eat warsaw? Look to the spines. The hard spines on the dorsal fin of a warsaw will be 10 in number. Snowy grouper will have 11 hard spines. Also, the second 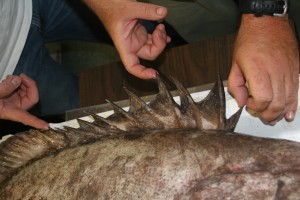 spine on the warsaw will be a lot longer than the third spine. On the snowy, they are about the same length.