When I was growing up, we had one television and it only received three channels. There was no remote control. You actually had to get up to change the channel and usually you had to adjust the antenna. We did not have a 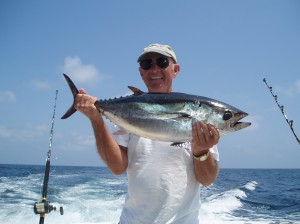 computer and there were no video games. In spite of this, I had the most fortunate of childhoods. For you see, the York River was my back yard and I had a father who took me fishing. My summer days were spent wading the waters of the York River, catching minnows, crabs, and clams to be used as bait when my dad got home from work. We mostly caught croaker, spot, grey trout, flounder, the occasional puppy drum and very rarely, a striped bass.

I still remember our first big trip, all the way out to the Chesapeake Bay. We went out to York Spit Light to catch the big bluefish that were there. I was mad as hops when 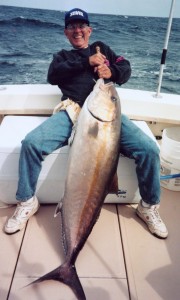 it was decided (by my dad) that I was too little to crank in one of these “big” fish. I just knew I could do at least as well as my mother did cranking in her fish. I also remember when my dad took me out on my first offshore charter out of Oregon Inlet. I guess I was about 10-years-old at the time. Dad had been going with a group of guys and they had one who could not go this time. It was a lot of money at the time but dad asked if I would like to go. On the way out, the captain stopped and trolled by one of the towers. I did not know that they were doing it just for me. That amberjack was my first big fish and amberjacks remain a special fish for me to this day. That offshore charter became an annual event which I greatly anticipated each year.

I remain passionate about the sport of fishing and I can thank my dad for that. There is not a week that goes by that I do not spend some time on the water. Now, it is my turn to take my dad fishing. One Fathers Day, I was taking him out to the CBBT to try for red drum. It was supposed to be a calm evening but it wasn’t so I stopped off of Plumtree Island and put out some baits. In less than 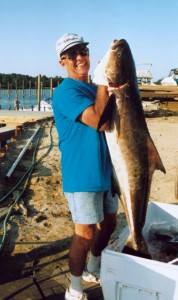 five minutes of fishing, my dad was hooked up to his first cobia. It weighed in at 65 pounds. I told him that it was usually not so easy. A more recent Fathers Day found us out at the Norfolk Canyon catching yellowfin tuna. He caught one fish and he said that he was done. That was not like him. A short while later, he had a couple of stents placed in his heart and he is back to normal. At 70, he rides his bike to work.

My children have televisions all over the house with both cable and satellite service. They have every video game system known to man and they each have their own computer. Add in school, sports, music and various other activities and it can be a challenge to get them out on the water with me. I try to pick calm days when the fish are biting well. It has become a tradition for my dad, son, and I to go rockfishing at Christmas time. We pick the calmest day and the catching is always good. My children enjoy participating in the youth tournaments sponsored by our 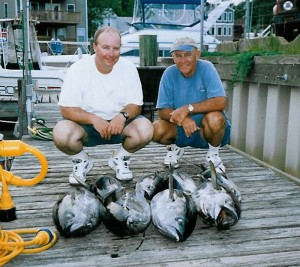 fishing club, the Peninsula Salt Water Sport Fisherman’s Association. With some effort, we manage a number of memorable family fishing trips each year. It is worth the effort. Our children will find their own way but we owe it to them to show them what is available for them out there on the water and just maybe, when I am 70 years old, one of my children will take me fishing.