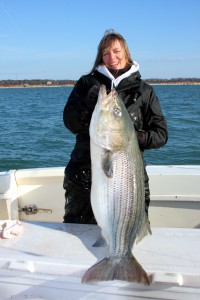 Bragging-sized striped bass return home to Virginia each Fall and remain until the Spring when they spawn and then head north for the Summer. It is during the cold weather months when you have the best chance to catch a jumbo rockfish and there is no better bait to use than a live eel.

Eels are slimy contortionist. They are hard to hold and once you have them on a hook, they are experts at twisting your line into knots. If they were not such an effective bait, we would not use them at all. The problem is they are one of the best baits to catch the largest stripers so we just have to deal with them. Surf-casters will put sand on the eel to make it easier to handle. Many anglers will ice their eels to make them lethargic. Both techniques work but I don’t want sand in my boat and sometimes, those lethargic eels don’t revive and lively eels get more attention. We keep our eels in a livewell. A dry fish towel is used to hold the eel when putting it on the hook. Once it is on the hook, do not waste any time getting the thing into the water. They are less likely to tie up your line once they are swimming around. 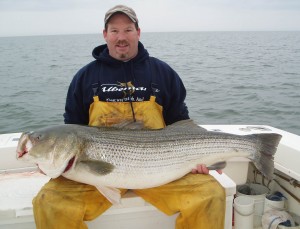 The best time to use eels as bait is whenever large striped bass are around. Here in Virginia, the prime months will be December, January, and February. We have caught trophy-sized stripers as early as October and during the Spring Trophy Season, eels can be your best bet at catching a keeper. Rockfish will feed day and night and eels are great baits in both the daylight hours and at night. A time when eels are not the best bait are when you are trying to catch a lot of fish. Eels are a selective big-fish bait. You are not going to see those 50-100 fish days fishing with eels like you can casting to fish with jigs. Another time when eels may not be your best bait of choice is when striped bass are locked in on another food source. Usually, stripers are opportunistic feeders and will eat whatever is available. Sometimes, if they are actively feeding on another food source, your eel may not even get noticed. When gannets are raining out of the sky and schools of large menhaden are bunched up by feeding rockfish, eels may not be your bait of choice. This does not mean to not use them. We have caught many large rockfish on eels in just this situation. But if you are not getting any bites when it is obvious large fish are actively feeding, it is time to change to something resembling what food source that the fish are locked in on. 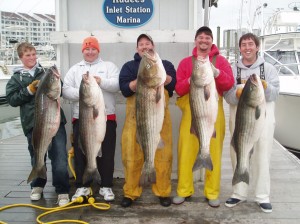 Use eels where the larger rockfish hang out. That really can be anywhere but there are areas which consistently produce most of the larger fish. The deepwater slew which runs down the Eastern Shore side of the Chesapeake Bay is a highway for large Rockfish. Buoy 36A off of the town of Cape Charles, Plantation Light, and buoy 18 near the Concrete Ships at Kiptopeke line up along this deep water slew and will often be referred to as landmarks by anglers eeling the area for rockfish. Large rockfish can be found in the deep water and up in the shallow water on either side of the deepwater slew. Good eeling waters continue from buoy 18 to the High Rise section of the Chesapeake Bay Bridge Tunnel (CBBT). In this area, you will find Latimer Shoal. The slopes on both sides of the shoal can be good areas to find large rockfish. Productive water continues onto the ocean side of the High Rise and wraps around the ocean side of Fisherman’s Island. There is a deeper water channel which runs between Fisherman’s Island and Nautilus Shoal that can be an excellent area to encounter large striped bass. The structure of the CBBT will hold large rockfish all along the span though most of the larger fish will be caught at the northern section from the 4th island to the High Rise. In general, eeling at the CBBT is more productive in the nighttime. Open water fishing is more of a daylight event meaning there is never a time you cannot be catching a trophy. 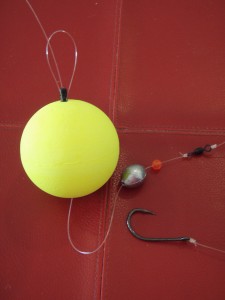 There are many different ways to fish with eels. The most common rig being used right now consists of a hook (either J or circle) attached to a swivel via a leader of about 3 feet long. Above the swivel is an egg sinker. Above the sinker is a float used to suspend your eel at the desired depth. You can use a balloon for this. There are floats made with release mechanisms so that when you hook up, the float slides down the line, allowing you to crank your trophy to the boat. A simple system is a cork and stopper (which also has a hole through it). You run your line through the cork and stopper. Place the cork where you wish on your line, make a loop in your line above the cork and push the stopper in. This will hold your bait at the desired depth until you hook up. At that time, the pressure from the fish will cause the stopper to pull out of the cork allowing it slide up and down your line. You will not lose the stopper since it will also be sliding up and down your line. This rig can be varied by removing the float. Now you have a down rod which will be fished right beside the boat. If you take the sinker and the float off of the rig, you now have a free line where your eel can swim wherever it wants. By having a combination of baits suspended at different depths under corks, down rods, and free lines, you can have a spread of eels covering the water column. 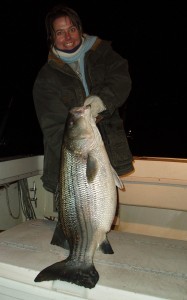 In open waters it is most common to fish your spread of eels while drifting. While fishing the pilings of the CBBT, it is normal to anchor on the up current side of the bridge and drift your eels back to the structure. When the current and wind allow, you can drift along or through the pilings with down rods suspended off of the bottom. Another technique is to position your boat on the down current side of a piling, in the eddy, and drop your eel down beside the piling. Crank the eel off of the bottom and try different depths. Try the different pilings until you find the hot one. 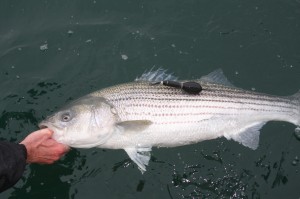 The wintertime fishery closes in the bay at the end of December. January 1, striper fishing in the bay becomes catch and release only. If you want to keep any fish, you will need to move out of the bay and fish the coastal waters. Catch and release eeling can be very good inside the bay after the season closes. The good news is that these fish have been shown to be very hardy during this time of year. A recent study, using satellite tags by Dr. John Graves, has shown that striped bass are very hardy creatures during the cold winter months in the salty waters found at the mouth of the Chesapeake Bay. His study did show a higher rate of deep-hooked fish when J-hooks were used with live eels but his study also showed that even these deep-hooked fish will survive the catch-and-release event. For more information on the research of Dr. John Graves, visit: www.vims.edu/about/directory/faculty/graves_je.php .

There are many great charter captains who can help you catch a Virginian trophy striped bass. A couple of very good captains are: