The low and deep rumbling sound that you hear, almost feel, might be an approaching thunder boomer. Afternoon thunderstorms can be common on the Chesapeake Bay and are something to   avoid. That booming sound might also be coming from another source who’s arrival is greatly anticipated each spring. Massive black drum gather together in large spawning aggregations and when courting, black drum are loud. When they are under your boat, their distinctive booming sound is much more welcome than the sound of an approaching thunderstorm. 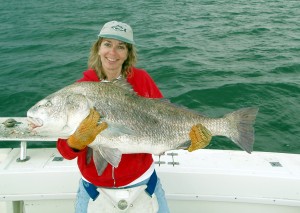 Black drum will arrive in Virginia’s waters during the month of April. There are several signs anglers can use to tell when it is time to start banging the drum. Dogwood blossoms are the classic sign. When the dogwoods bloom, black drum are here. Water temperature is a good indicator. When the bay water temperature reaches 55 degrees, black drum should be here. Some anglers will go by the moon phase with the full moon of April being the start of the drum season. While the black drum fishery will start sometime in April, the prime time to fish for these behemoths is the month of May. This aggregation of black drum usually will end in early June. A cooler than average spring with a lot of rain can extend this bite through the entire month of June. 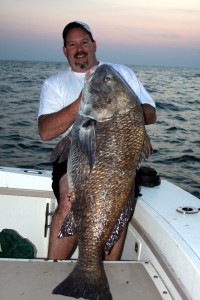 Schools of big black drum gather along Virginia’s Eastern Shore each spring. Historically, the location to fish was the “Cabbage Patch”. You will still see this listed on some charts in the area north of Latimer Shoal and it is still a great location to target black drum. Today, you do not hear about the Cabbage Patch much anymore. Most drum anglers will refer to a nearby buoy as a means of identifying where the drum are being caught. These areas are not hard to find. On any pleasant afternoon during the month of May, a fleet of boats will be at each black drum hot spot. The buoy closest to the Cabbage Patch area is buoy 16 at the north end of Latimer Shoal. Traveling down the bay, the next black drum fleet will be found at buoy 13 on the bay side of the high rise section of the Chesapeake Bay Bridge Tunnel (CBBT). On the ocean side of the high rise section of the CBBT is buoy 10 and another fleet of drum fishermen will be found there. You really can connect the dots (buoys) and the entire area is black drum territory. The drum don’t care where the buoys are, the fishermen do. Black drum aggregations can also be found in the inlets along the seaside of the Eastern Shore. The best of these has been just inside the Great Machipongo Inlet in between Cobb and Hog Islands.

Things to look for

There is not a magic water depth for black drum. In general, the depth we are fishing is in the mid-twenty feet range. As you are determining where you want to set up to fish, watch your bottom machine. Large marks on the bottom indicate that you have found them. Anchor your boat just up current of where you marked the fish. There will be other boats fishing the area as well. There is no need to crowd anyone but pay attention to what they are doing. If anglers are fighting fish, you want to anchor up in that area. Another sign to look for is a black drum 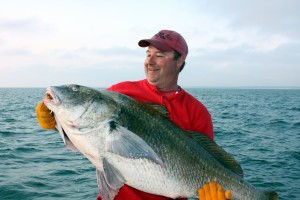 tethered up to the back of a boat. Most black drum are released but some are kept as food and those kept fish are usually placed on a stringer. There are a couple of reasons for this. These fish are big and most boats will not have a cooler large enough to put them in so they are kept alive, in the water, until it is time to run in. The other reason is that these fish are schooling together and having a drum in the water, by your boat, booming away is thought to help keep the other fish in the area. I don’t know why someone has not come up with a drum call yet. Anyway, if you see boats with tethered drum, fish there. Virginia’s Eastern Shore is black drum central. There are a number of very well known charter boats who fish for black drum out of Cape Charles. These captains are experts and learning to recognize some of these boats is also a good way to know that you are fishing in a good area. Again, there is no reason to crowd anyone but when you see one of these boats fishing, there is a reason that they are there.

Time and Tide (wait for no man)

Black drum can be caught on any tide, day and night. Most anglers feel like the bite is better around the change of 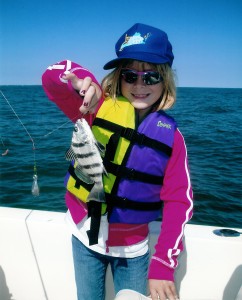 the tide when the current is not running too hard. I know that I prefer to catch them then. When you hook up one of these wide-bodied fish during a hard running current, you are in for a tough fight. They are much easier to handle with a light current. While they can be caught all day and night, there is a magic time to catch these fish. The bite seems to be best late in the afternoon through dark with the last two hours of daylight being the magic time. This makes this fishery the perfect after work fishing trip and during the week, you will see an armada running to the fishing grounds after 5 PM.

Black drum will be caught by anglers fishing for tautog. Others will fall to lures being trolled for  striped bass or red drum. An occasional spadefish or sheepshead angler will be surprised by a big black drum. To target these fish, we are going to anchor in the spot we have chosen and fish bait on the bottom. Black drum are not going to give you long, blistering runs but they are large and strong. Add some current and the fact that you are fishing from an anchored boat means that you need to use some fairly hefty tackle to land these fish in a reasonable time. Tackle in the 30-pound class is about right for this fishery. Lighter tackle will work but it greatly increases fight times. Terminal tackle consists of a standard fish finder rig with a sinker slide above a swivel with a sinker heavy enough to keep your bait on the bottom. Six ounces is about right most of the time. A leader of about 80-pound test mono is used. Leader length is about 3-feet below the swivel leading to a 8/0 to 9/0 hook. Circle hooks are becoming more popular for this fishery though most anglers are still using J-hooks. Fish as many rods as you have anglers to handle. Keep some baits in close to the boat. Cast others further away and out to the sides. Place your rods in the rod holders and wait for a big boomer to find one of your baits. When you get a bite, expect your other baits to get 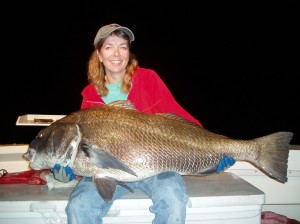 When I place my rods in the rod holders, I like to have the reels in gear. The best bites are when the drum eats your bait, swims away, the rod bends over, and the fish hooks itself. When they bite like this, it is very easy. Other times, they can be very gentle nibblers for such large fish and it can be a challenge to hook them. We will watch our line and rod tips. When there is a nibbler, take the rod out of the rod holder and drop the tip towards the fish. This gives some slack in the line and allows the drum to eat the bait without any resistance. Give it a few seconds and reel tight. Set the hook when using J-hooks. Just keep reeling with circle hooks. While I keep my reels in gear, most will have their reels out of gear with the clickers on. Both techniques work.

When targeting black drum, baits are crabs and clams. A classic drum bait is a Chesapeake Bay Sandwich which is softshell crab and clam on the same hook. Softshell and peeler crabs are good black drum baits and have the added benefit of also being a favorite food for big red drum. A big red is not a bad by-catch while fishing for black drum. Clams cannot be beat as black drum bait. We have two types to choose from: chowders and sea clams. Both work. Chowders are easier to get and to keep alive for an extended time. Sea clams are large and tough, staying on your hook better.

Once you have set up, take a couple dozen clams and crack their shells. Now, dump them overboard. When the tide changes and the boat swings around on the anchor, do it again. Chumming the area with cracked clams helps to draw the drum to your boat and to keep them there.  When you have left-over clams after a fishing trip, you can 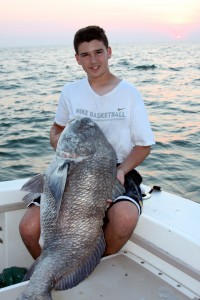 save and freeze them. These frozen clams can be used to chum the area on your next trip.

After playing tug-of-war with one of these old creatures of the sea, you will need to do something with it. A very large landing net will greatly aid in boating the fish. Remove the hook, pose for a photograph and now what? Some people eat black drum but most are released. They are hardy fish but they do have a problem when first let go. If you just throw the fish overboard, chances are, it will float away, belly 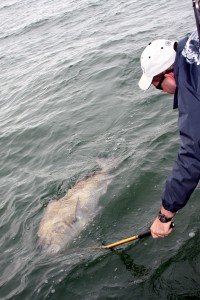 up. If you will hold them by the boat for a bit, head in the water facing into the current, they will recover and swim away just fine. This sounds easier than it is. You can try and hold them by the lower jaw with a gloved hand or with one of the lip gripping devices. You may have to lean way over the side to keep the fish’s head in the water. An effective way to do this is to use a gaff and lip-gaff the fish. The downside is a hole in those thick rubbery lips. The advantage is that you now have a long handle to hold the fish in the water with.

We are not done yet. When the spawning aggregations break up in June, some black drum will spend the summer around the rock islands of the CBBT. This is a sight fishing opportunity. These fish will be caught by anglers casting jigs with rubber trailers. If you are a fly rod enthusiast, this is your chance to catch one of the largest fish in the Chesapeake Bay. Fishing for drum around the islands is best early and late in the day and during the week when boat traffic is light. These fish spook easily. Clams are still a great bait for this fishery. Here, no weight is needed. Just put a clam on a hook, lob it into the school of drum, and let it slowly sink. One of those big boomers will eat it.

The Black Drum World Championship Fishing Tournament, held out of Cape Charles, is scheduled to coincide with the peak of the black drum run each year. For information about this tournament, visit: www.esvachamber.org/festivals/drumfish .